Java-immigrant Ahmad Zahid Hamidi misfortunes continue with no end in sight. It’s no wonder why the once powerful deputy prime minister was so eagerly getting back his seized passport to perform his “Umrah” in Saudi, despite the “mini Hajj” is non compulsory. He was so yearning that he fought to the Federal Court, the highest court and the final appellate court in the country.

Unfortunately for Zahid, the Federal Court five-member bench was unanimous in dismissing his appeal to the return of his passport as the court agreed with previous High Court’s judgement that he is facing serious and multiple charges, hence, the likelihood and risk of absconding. Later, Zahid offered his version of a story as to why he must travel to Saudi.

Although Zahid, known for his thuggery and corruption, had been performing Umrah for the past 30 years, his persistence in wanting to perform “Umrah” was due to his “hope and belief” that only the God could save him from going to jail. Days after his failure, Zahid recalled how he received 18 “missed calls” in 2015 while he was in Mecca, Saudi performing Umrah. 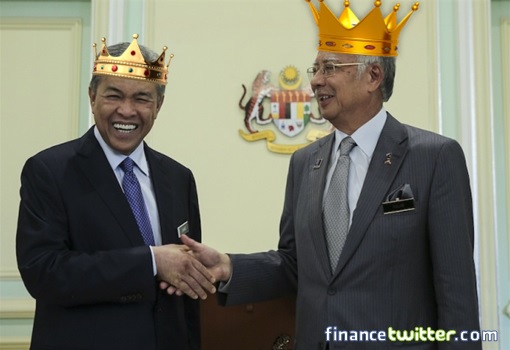 Apparently, those calls were from his boss, then-PM Najib Razak, requesting his immediate return so that he could be appointed as the new deputy prime minister. So, Zahid thought the history will repeat itself and his luck could change for the better – if he could do Umrah again. He might miraculously receive missed calls again, informing him that all his 47 criminal charges are dropped.

Already facing record 47 charges of criminal breach of trust (CBT), money laundering and corruption involving RM124 million, UMNO president Zahid has been slapped with additional 7 more corruption charges today. In total, he now faces 54 charges. But the party has just begun. The crook was so corrupt that even his boss Najib may not be able to match him.

Newly-appointed Malaysian Anti-Corruption Commission (MACC) chief commissioner Latheefa Koya said Zahid Hamidi will face 33 more charges tomorrow, on top of the 7 charges that were filed today. With the 40 new charges, the gangster Zahid will break another record – the first man to face 87 criminal charges. And you can bet your last dollar that it will breach 100 soon. 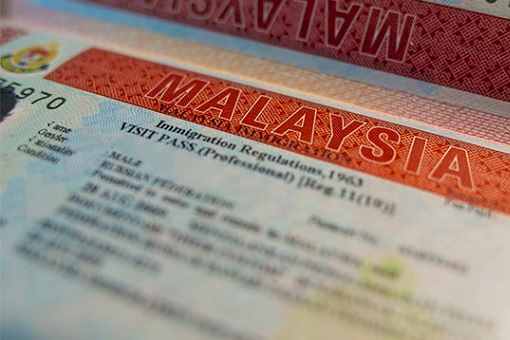 The new 40 new corruption charges involved a total of RM47 million in relation to overseas visa system (VLN). For the first 7 charges filed today, the former deputy PM is to be prosecuted for receiving a total bribe of S$4.24 million (US$3.13 million; RM12.97 million) to extend the contract of Ultra Kirana, the operator of a one-stop centre in China and VLN (Visa Luar Negara).

The offence allegedly happened at the deputy prime minister’s official residence in Seri Satria, Putrajaya, between March 28, 2017 and March 2, 2018. Zahid faces up to 20 years’ jail if found guilty. The corruption case is so mind-blowing that the MACC chief Latheefa and her deputy took time to attend the proceedings at the Kuala Lumpur Court Complex.

As early as 2015, Mr. Zahid, who was the Minister of Home Affairs from 2013 to 2018, was condemned for appointing middlemen in foreign countries to “process” visa applications from workers coming to Malaysia. It has resulted in higher costs of recruiting foreign workers and has drawn protests from worker groups in source countries – especially Indonesia, Bangladesh and Nepal. 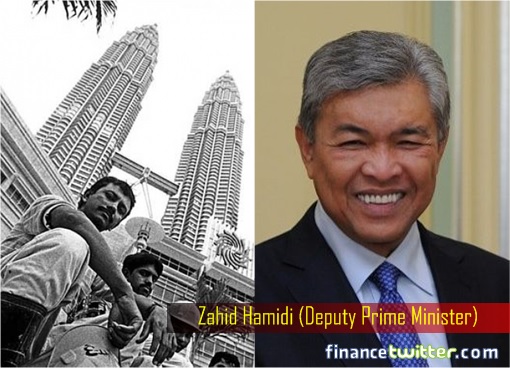 Initially, foreign workers or their agents could submit their applications directly to the foreign missions and pay RM15 for processing. However, a new ruling imposed by Zahid, which was enforced in November 2014, required applicants of the foreign landing visa (VLN) to submit their forms to a one stop centre (OSC), which will charge RM100 per head, in addition to RM105 charged for “VLN services”.

To add salt into injury, another company was appointed to carry out “immigration security clearance” (ISC) checks. The ISC company, believed to be linked to Zahid Hamidi and his cronies, would charge RM105 per head for identifying applicants who have been blacklisted from entering the country. Employers would have to pay for all the additional expenses introduced.

The Home Ministry argued that the new system and service charge would enable a smooth flow in processing visa application. Local industry players, however, had questioned the need for such centres and high costs when foreign missions have been doing the jobs without any hassle in the past. Yes, Zahid had been enriching himself with truckloads of money with the introduction of the 3 other costly layers. 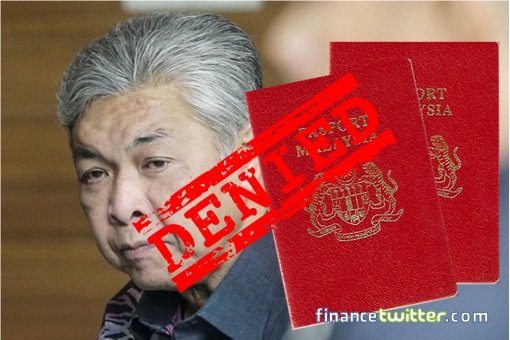 Previously, employers had to pay a levy of RM1,250 and a processing fee of RM200 and RM15 at the time the application is submitted at the foreign mission. With the introduction of three newly created “centres”, the cost has gone up from RM1,465 to RM1,775. At the time, the cost of sending 150,000 Indonesian workers alone would cost a staggering RM457 million.

As it turned out, the jobs of the so-called VLN, OSC and ISC are merely to just receive the applications and forward them to the embassy. Even in the case of visa applications, the company just keys in the particulars of the applicants into a computer and forwards it to the embassy. It was a “clerical” job which required no special skills or technology. It was an ATM machine created to serve the greed of Zahid.

In essence, VLN service has no meaningful value-add component whatsoever, but is merely an unnecessary collecting agent service. The biggest joke is this – ISC is tasked to carry out security screening “AFTER” the entire process of obtaining the visa has been completed, and of course, “AFTER” all the unnecessary fees have been paid. But Zahid had no idea how ridiculous and illogical the process has been. 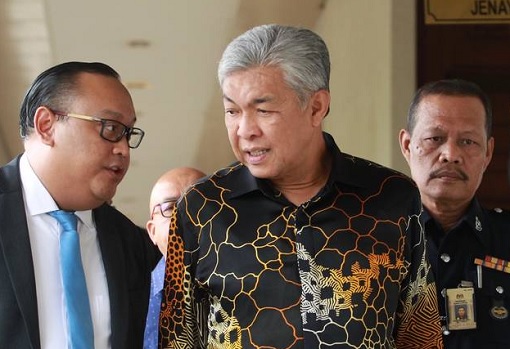 In truth, the disgraced Zahid should also be charged with treason. That’s because the national security and government’s interest have been compromised or jeopardised after the outsourcing of visa application to a third party like Ultra Kirana. It was revealed last year that the company had failed in its role as a screening and early vetting system for Chinese nationals entering the country.

But the daylight robbery didn’t stop with VLC. In early 2016, newly-crowned deputy prime minister Zahid Hamidi proposed to flood the country with an extra 1.5 million Bangladesh workers, despite the fact that undocumented or illegal foreign workers had already exceeded 1.7 million. Thanks to massive criticism, the crooked Zahid was forced to temporarily freeze his “cash cow” pet project.

However, the temporary freeze came within 24-hour after Mr. Zahid signed a memorandum of understanding (MOU) with Bangladesh to import its workers. Acting secretary of Expatriate Ministry in Bangladesh, Begum Shamsunnahar told the Dhaka Tribune – “It is just an eyewash. Bangladesh will send workers to Malaysia as per the deal signed between the two countries.” 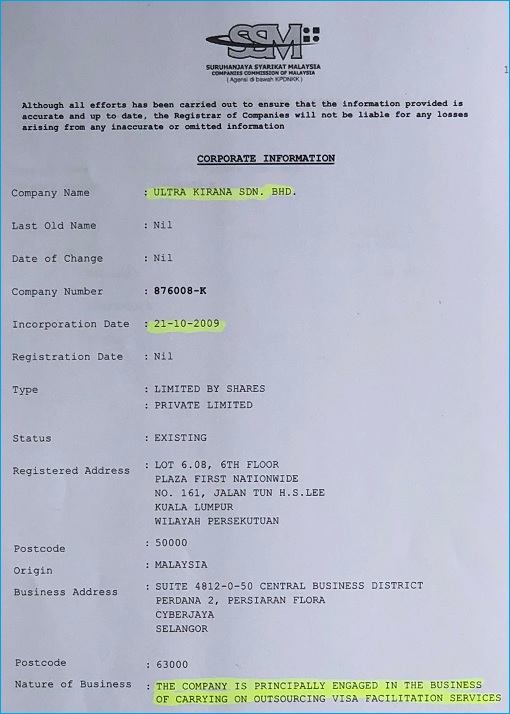 For processing some 2 million China nationals alone, Ultra Kirana reportedly have made an estimated RM198 million profit from March 2016 to September 2018. Not bad for a company that has about only 20 agents throughout China to do the “clerical job”. UMNO supporters can absolutely take pride in producing a unicorn like Ahmad Zahid Hamidi, arguably one of the most shameless crooks.

Could this be the SCANDAL of the century?