Luang Prabang province in northern Laos is more than 300 kilometers away from the capital of Laos Vientiane. A trip between it and the capital used to take up to seven hours by car, but now it only takes about 2.2 hours by train, a shortcut that local Lao Anly and her family are grateful for each day.

As a direct witness of how the China-Laos Railway has brought about change to her life, Anly, who works as a customs broker at the Vientiane branch office of Kunming-based Yunnan Easy-trans International Freight Forwarder Co, often had to travel between her office in Vientiane and her home at Luang Prabang. But with the long distance and tiring journey between the two places by car, she could only travel once every two weeks to see her husband and three children – putting pressure on her family, now with the new railway, she can go home every day if she wants to.

Anly is not alone. As of September 1, the China-Laos Railway had achieved a total of 6.71 million passenger trips. The railway has also changed cargo transport, shoring up the regional economy and trade flows, with up to 7.17 million tons of cargo transported as of early September.

The China-Laos Railway significantly boosted the development of logistics and flow of people across Laos, bringing to life Laos’ strategy of “changing a land-locked country into a land-linked country.”

The 160-kilometer-per-hour train that travels back and forth between Vientiane and Boding, next to the Chinese border unlocks a host of new opportunities. Travel demand has been so strong since its launch that the railway company now runs extra trains on weekends and special holidays, the Global Times has learned.

The popularity of the train service has also quelled some of the initial criticism of the project, as some economists had flagged concerns that the mega-project would benefit China and Thailand to a greater extent than Laos, and that Laos would build up debt with its northern neighbor.

Nine months since its launch in last December, the train service has substantially accelerated the pace of industrial layout and development along the rail line while injecting new impetus into regional development and improvement of people’s livelihoods. After the opening of the China-Laos Railway, the journey from Vientiane to the China-Laos border has been shortened from two days to just three hours.

For Zeng Cheng, a project director from Yunnan Easy-trans International Freight Forwarder Co, a Chinese agent doing cross-border trade between China, Laos and other Southeast Asian countries, the railway has transformed his business.

Since the opening of the railway, Zeng’s company has begun eying new markets, such as the import and export clearance and transportation of bulk materials like fertilizers and cloth, e-commerce materials and fresh fruit.

Through the China-Laos Railway, these materials are sent to other cities in Laos, Thailand and Myanmar by land transport from Kunming to railway stations in Laos while his company’s major clients have also changed from large state-owned enterprises to foreign private enterprises and individual merchants.

Zeng has a Lao friend named Binbin. In the past, Binbin’s family was mainly engaged in farming, living off a modest income. After the Lao railway was built, he applied for a technical apprenticeship working in railway maintenance. Through the study, training and assessment in railway work, Binbin is now a technical engineer and has his own apprentices.

“The railway gave him a skill set in addition to a good income to his family, and he truly loves the railway for all the possibilities it has provided,” Zeng said. 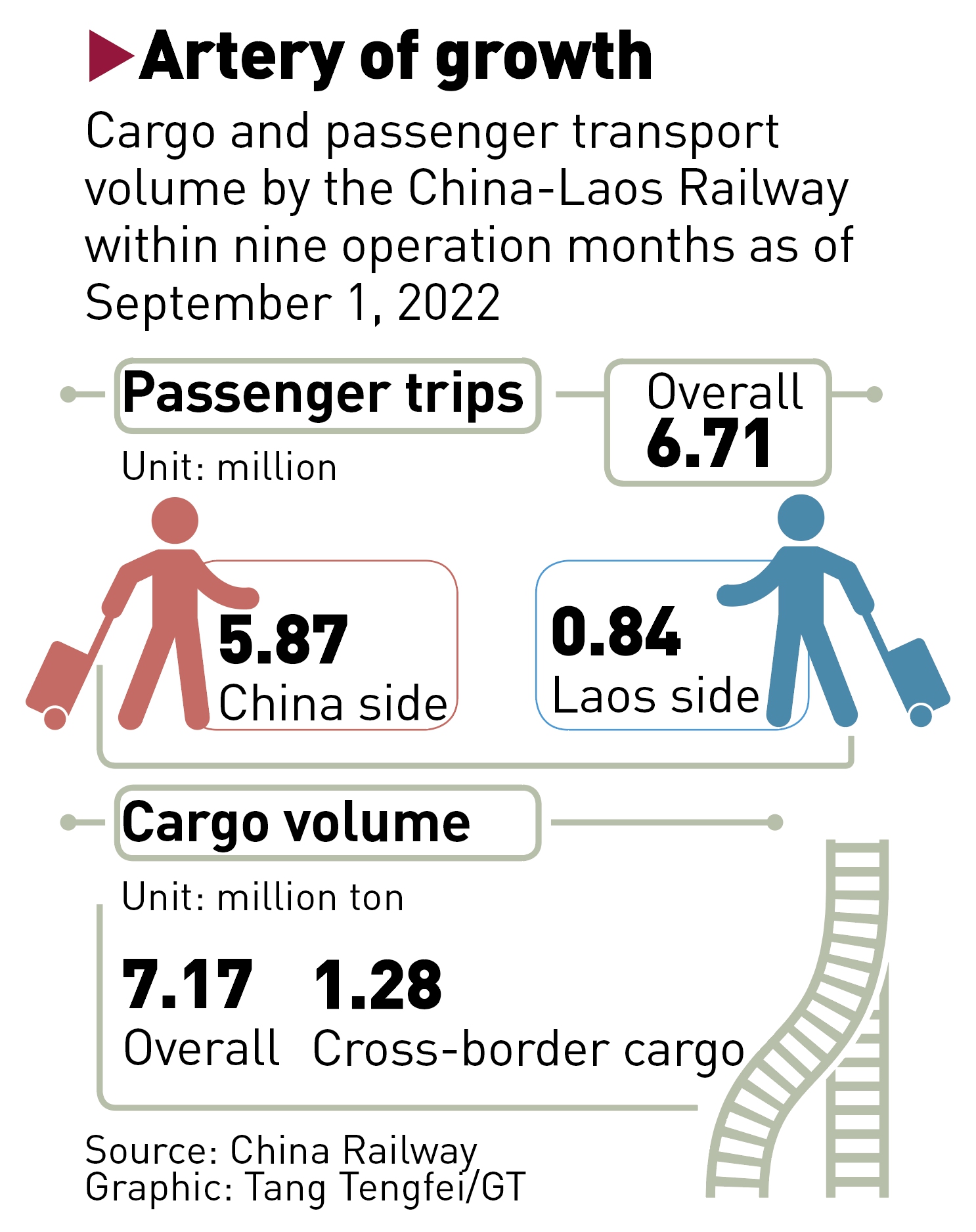 While the railway has made differences to many local travelers and merchants, it has come across an explosive demand driven by tourism from around the world, which is reflected on the hard-to-get tickets over recent days, especially for tourists, a phenomenon that has already drawn the attention of railway operators and local authorities who have pledged to make further improvements when it comes to buying a ticket and overall train operations.

Laos is a tourist country, with travelers from Thailand, Vietnam and South Korea all major markets for inbound tourists. “While travelers experience the convenient high-speed rail services brought to Southeast Asia by China, a huge number of tourist groups brought by travel agencies has made it more difficult for individuals to queue up and buy tickets offline,” a Chinese traveler surnamed Yang told the Global Times.

“Tickets for the high-speed rail are sold three days in advance, and they are basically sold out on the same day…individuals might queue up for three hours, but there is no guarantee of a ticket,” said Yang, who is having a hard time to grab the ticket himself.

Cantona, a local business person who runs a travel agency in Vientiane, told the Global Times that “due to the impact of the epidemic and the prevention of ticket scalping, each person could only buy three tickets at a time three days in advance, which was indeed inconvenient for tour groups.” But he said that the station now allows travel agencies to get access to group tickets and handle the group purchase of tickets.

Kaysone Keomany, Director-General of the Railway Police Department under the Ministry of Public Security of Laos, said in a media interview that the increase in demand from international and domestic tourists has led travel agencies to retain more tickets purchased from stations.

The Laos-China Railway Company is working with the Ministry of Public Works and Transport and the Ministry of Culture and Tourism to carry out research to optimize the train ticket purchase process and increase opening hours for stations, according to Keomany.

With the cross-border train set for further upgrade and improvement, the Lao government expects that the China-Laos Railway will be a major hotspot for attracting more tourists, aiming to transport 3 million tourists this year alone.

The popularity of the train service has addressed some of the initial criticism of the BRI project, with some people worried that the mega-project would benefit China and Thailand to a greater extent than Laos.

Nine months after its launch, the total international freight value of the railway has exceeded 10 billion yuan（$1.43 billion, and the freight transportation has covered Laos, Thailand and other countries and regions, and the categories of goods delivered via the railway line have expanded to more than a hundred ranging from cars to flowers.

This BRI signature project potentially offers a transport blueprint for the wider region. In a recent interview with Nepali Ambassador to China Bishnu Pukar Shrestha, he told the Global Times the positive impact brought by the China-Laos Railway, an outcome which “has excited us too,” while referring it with the good example for a future cross-border railway project between China and Nepal, with a feasibility study already underway.

With the right reforms undertaken by the Lao government, the railway connecting Laos and then to Thailand, Malaysia, and Singapore to the vast BRI network could potentially increase aggregate income in Laos by up to 21 percent over the long term, according to the World Bank.

The transit trade through Laos along the railway corridor could reach an estimated 3.9 million tons per year by 2030, which would include a shift of an estimated 1.5 million tons of trade from maritime transport to the railway, the World Bank predicted, noting that the project could make the country more attractive to investors, create new jobs, and accelerate economic growth.

The opening of the China-Laos Railway is historic, providing new opportunities for the development of Laos, and people and enterprises all over the country have benefited from it, Vice President of the Lao National Assembly Sommad Pholsena told the Global Times.

“It is time-saving and convenient, which will drive the Lao economy to a higher level,” the vice president said.

Timeline: The life of Queen Elizabeth