The trading relationship between the US and China was one of the dominant themes of the Trump presidency, forcing the rest of the world to pick a team. At the start of a new administration we take a deep dive into how, if at all, the situation could change under Biden. The first part looked at the prospects for turning back the clock and this second part analyses the consequences of a further deterioration in the relationship.

Another extreme scenario, the opposite to that of going back to the romanticised good days of globalisation, would be a complete parting of ways between the US and China. This sentiment is probably best captured in the title of a recently published book: “The Great Decoupling”. It was written by Nigel Inkster, a former senior executive of the UK’s Secret Intelligence Service (SIS), more commonly known as MI6.

Admittedly, this decoupling did not start from Trump’s combative approach to China and was not only initiated from the American side. China’s internet has been insulated from early on. Many of the world’s most popular websites, from Google to Wikipedia, are partially or entirely blocked by the Great Firewall.

In telecoms China has long harboured the ambition to set its own standards that could give domestic companies a leg up while arm twisting foreign companies, who covet the market, to comply. The classic example was the so-called home-grown 3G standard TD-SCDMA that the Chinese government promoted so hard as to mandate the strongest operators, China Mobile, to roll out a nationwide network based on the technology. An unintended effect of this policy was that China Mobile became the most aggressive operator to launch LTE network, so as to get out of the dead-end of TD-SCDMA.

What set the wave of decoupling of the last four years apart from the earlier years, which were more characterised by the Chinese side going its own way on technological or business grounds, was the willingness on the American side to sever ties, and the mutual hostility demonstrated in the process.

Donald Trump won the 2016 election on a nationalist, “America First” ticket, and he set out to deliver on his promises including, inter alia, balancing trade with China and reverting the trend of jobs leaving America. Four years on, the results could be described, at best, as mixed. There has not been a large-scale inflow of American companies returning from China, despite relocation incentives. The trade deficit with China, on the other hand, did come down in the second half of Trump’s presidency, with 2020 poised to see the smallest trade deficit with China in a decade. This was achieved through heavy-handed measures including hiking tariff on Chinese import and forcing increased purchase of American goods through trade deals. 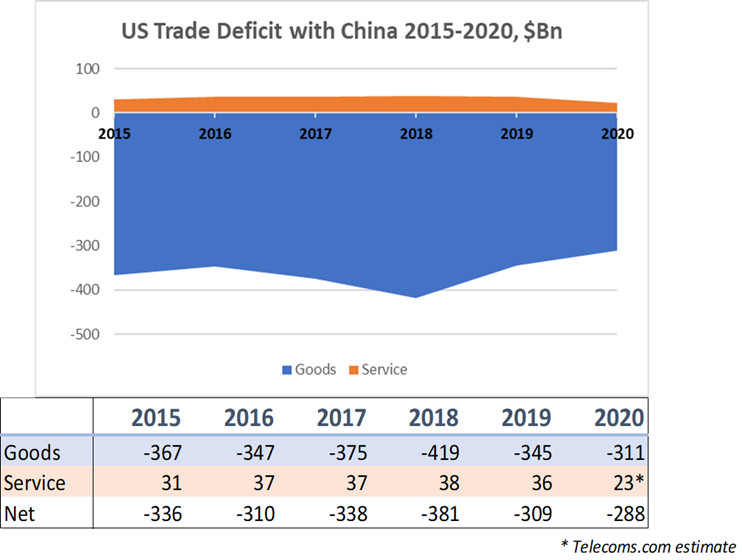 Trump’s signature move to take on China was his persistent effort to destroy Huawei. The case against Huawei (and ZTE) in America long pre-dated Trump’s time in office. Back in 2012 the House Intelligence Committee published a long investigative report to warn the country of security threats posed by the Chinese companies and to discourage American businesses from buying their equipment. This didn’t stop cash-strapped regional broadband operators deploying hardware and software from ZTE and Huawei and becoming defenders of the suppliers in front of the Congress and the FCC.

What Trump did differently was to pressure allies to stay in line, in particular to ban Huawei from their countries’ 5G networks as the US has done from the outset. However, the carrot and stick approach he adopted (there has been more stick than carrot, admittedly) has not always been effective, especially outside of the so-called anglophone countries.

Putting Huawei on the entity list kick-started the process of forced decoupling of many American suppliers, including the leading chip makers, from one of their biggest customers. The watershed event of the detention of Meng Wanzhou, Huawei’s CFO, has accelerated the politicisation of the rivalry between Huawei and the western countries. Despite the strenuously built narrative that Huawei is a private company owned by its employees and operates independently of the Chinese state, the reactions from the Chinese government have painted the company as anything but. These range from the arrests of two Canadian nationals on flimsy charges immediately after Meng’s detention at Vancouver to the explicit, sometimes bellicose, threats of retaliation delivered through the Chinese embassies to western countries that dared to consider banning Huawei.

This in turn has hardened the feeling of enmity in the western countries. The no holds barred support for Huawei is also in stark contrast to the aloofness the Chinese government adopted when ZTE was heavily punished for its transgression in Iran. ZTE is by every definition a state-owned enterprise.

As Inkster argues in his book, decoupling in the business and technology domains is generating increased distrust between the US and China, encouraging each side to interpret the other side’s behaviours in worst-case terms, and in turn incentivising them to sabotage and undermine each other in whatever way possible.

Though it was not the first instance, the difficulties Huawei has run into (as well as the earlier treatment of ZTE and more recent experience of SMIC, China’s biggest chipmaker) have reinforced the message to the Chinese authorities that the global division of labour does not always go in its favour either. It relies on the US (and its allies) to get access to the advanced technologies and components, and the US can cut the supply with the legal as well as commercial tools at its disposal. Huawei’s new smartphones suddenly became impossible to sell outside of China when Google was forced to cut it off from much of Android. Such handicaps would become additional incentives for China to decouple of its own accord. However, try as they both may, complete decoupling is neither easy nor always desirable.

It took the Pearl River Delta area over two decades to develop into the manufacturing ecosystem it is now. It is true that we have seen in recent years a number of multinational companies opening new production facilities in countries like Vietnam and Myanmar or moving their established manufacturing facilities out of China to South-eastern Asia in pursuit of lower cost. However, moving factories from one country to another may be complex and expensive, replicating the ecosystem in the shape of southern China any time soon is impossible.

Decoupling may alleviate the pressure to rely on the other side for critical supplies, but it does not address other problems of globalisation, especially the concentration of power in the hands of a few global vendors in some of the most critical sectors.

Much attention has been given to the concentration of microchip manufacturing (Samsung and TSMC) and telecom equipment supply (Ericsson, Nokia, Huawei), but not many commentators have looked into the concentration of cloud computing (Microsoft, Amazon, Google, Alibaba). The long-established duopoly of mobile operating systems (iOS and Android) is generally seen as a good thing, or at most, with a shrug of shoulders. In other words, America and China, by ridding each other through a decoupling from over-relying on each other would still be at the behest of the dominating global companies, which could actually give these companies even greater power.

Is this what Biden and Xi want to see in the years to come?

Commentary: Why are JEWS persecuted?

Corporate America vs China Inc: the constants and the variables