Kieron Monks, CNN • Updated 9th March 2020
(CNN) — Travelers in Dubai could soon be enjoying more scenic routes with the addition of aerial vehicles to the public transport network.
Dubai’s Roads & Transport Authority (RTA) has signed a memorandum of understanding with British company Beemcar to develop driverless pods that would operate above the city traffic.
The system, described as “a cross between a monorail and a ski lift,” would see electric pods seating four passengers each traveling at 50 kilometers per hour along routes stretching almost 50 kilometers through the city’s busiest districts.
The pods would be suspended from carbon composite beams a minimum 7.5 meters above ground and remain horizontal at all times to ensure “a calm stomach” for passengers. Beemcar claims the network could accommodate around 20,000 passengers per hour. 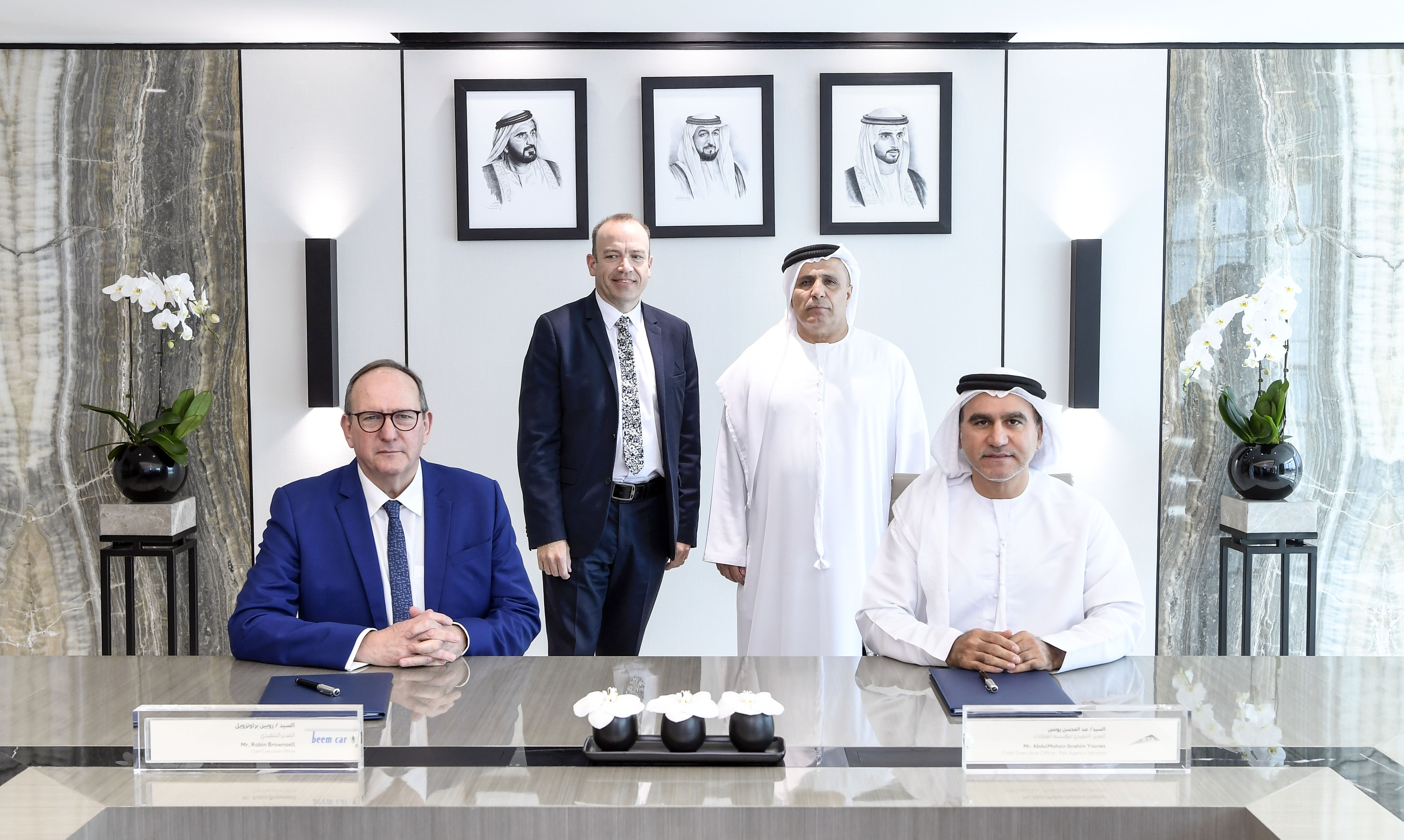 The venture fits into Dubai’s ambitious plans for 25% of journeys in the city to be made via driverless transport by 2030, as well as increasing the proportion of journeys made by public transport.
City authorities are also developing systems such as autonomous air taxis and driverless “last-mile” shuttle buses. 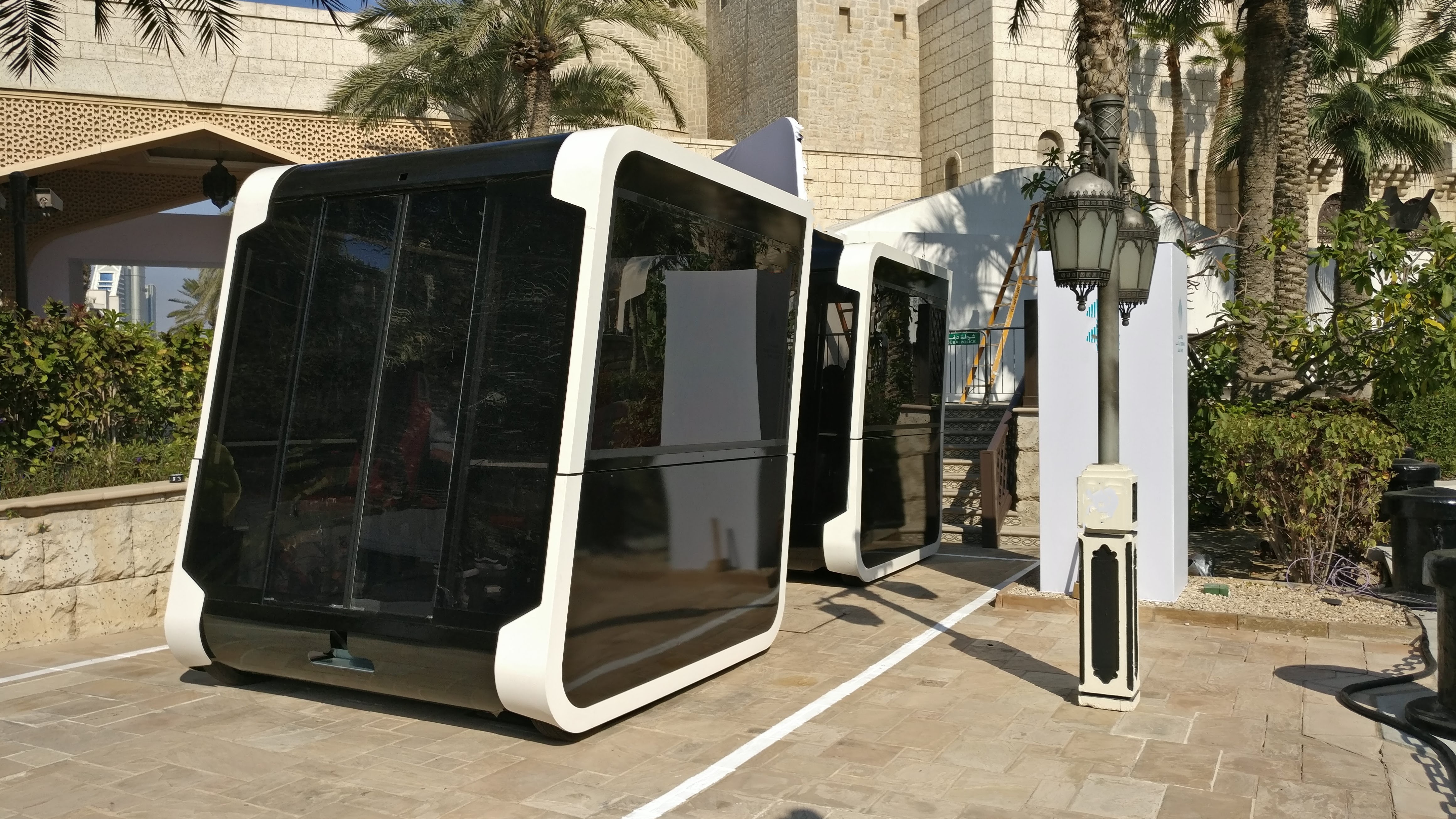 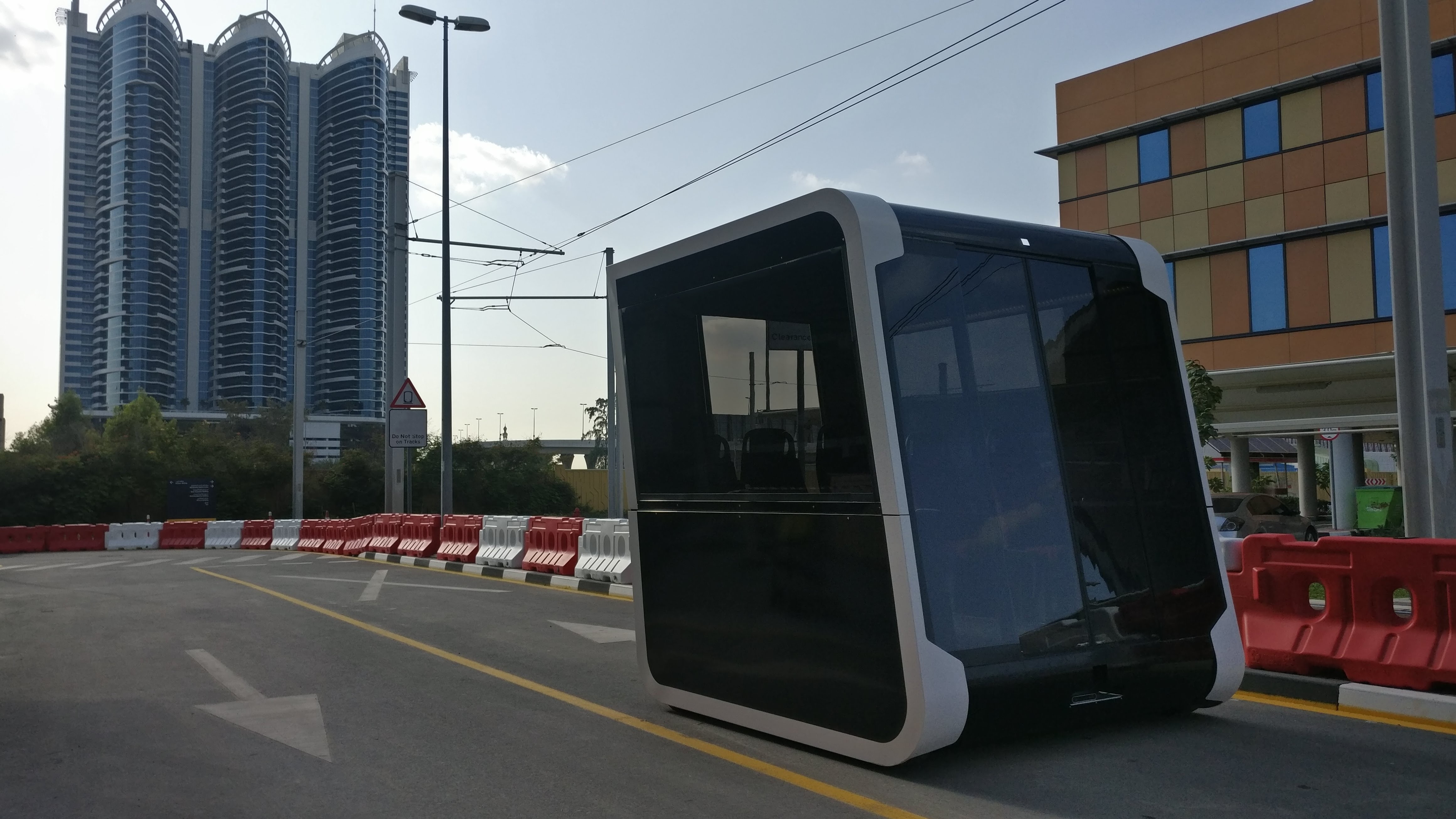 Dubai trials self-driving vehicles: As part of its efforts to promote driverless vehicles, Dubai trialled this autonomous module from NEXT Future Transportation, which could be showcased at Expo 2020.
NEXT future transportation
Beemcar CEO Robin Brownsell claims the electric network would also offer benefits through sustainability and save space relative to ground-level transport infrastructure.
“The significance is for dense urban environments,” the CEO says, suggesting the system could free up space for healthier modes of transport such as walking and cycling.
No figures are currently available for the investment required but Beemcar claim the system would be sustainable through income from fares and Brownsell is confident it would be competitive with traditional public transport networks.
He points to the case of Glasgow Airport, Scotland, where an elevated pod system has been proposed in preference to a more expensive rail link.
No completion date has been given but it is hoped the Dubai system will be operative before the 2030 deadline for 25% driverless transport. Beemcar is to open a development center and will work with Dubai authorities over the next “three to four years” to earn a license to carry passengers.
The company has worked to develop the system with support from the British government, which hopes the model could be scalable.
“We welcome BeemCar’s ambitions to create a modern transport system that’s fit for the future,” UK Transport Minister Rachel Maclean told CNN. “Sky pods could help to manage traffic in some of the busiest cities, improve air quality and make cycling and walking even safer and more enjoyable.”

The RTA is also working with two other “sky pod” companies, US firm SkyTran and Skyway of Belarus, which are also aiming to deliver aerial networks in Dubai.
Neighboring Emirate Abu Dhabi is exploring the introduction of a SkyTran system to serve theme parks on Yas Island.
The field of Public Rapid Transit (PRT) vehicles — loosely defined as lightweight, driverless vehicles operating on segregated tracks along defined routes — has been in development since the 1950s without achieving widespread adoption. Just a handful of systems have achieved implementation, such as the “Urban Light Transit” network at Heathrow Airport in the UK.
The field has been hamstrung by regulatory hurdles, says Nathan Koren of UK-based urban transport consultancy Podaris.
“Regulators have traditionally had a difficult time accepting vehicles that are following each other at high speeds and close distances,” says Koren. “You need to be really robust in your safety techniques to prove it is acceptable.”
Brownsell also points to the political will required to develop new infrastructure.
“Most planning applications in the UK for large scale infrastructure projects take about 15 years,” he says. “(But) if you have a vision and it’s getting top level support, some of those obstacles are not necessarily there.” 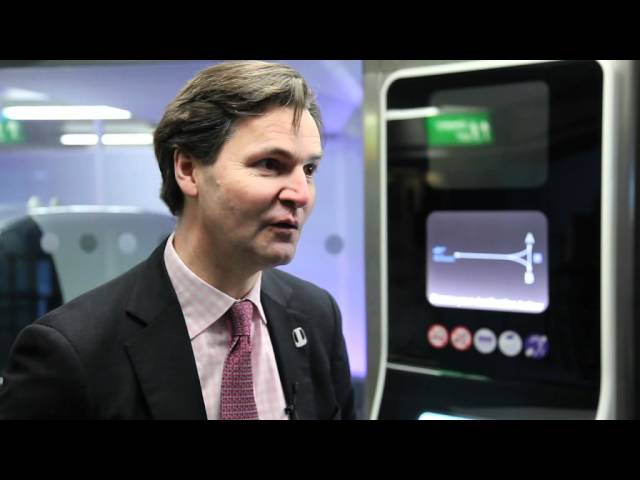 Koren believes we could be on the verge of an “explosion” of PRT systems.
“There has been quite a proliferation in the last couple of years of more serious attempts to build these kinds of systems that has never happened before,” he says, adding that most are not yet public.
Koren suggests the progress of driverless cars are benefiting PRT systems.
“The first PRT systems had to use entirely custom hardware for their navigation and control,” he says. “All of the investment in autonomy has created things like cheap LIDAR sensors and vehicle-to-vehicle communication standards.
“That means a lot of the technology you need to implement PRT systems that was previously strictly bespoke, you can now just buy off the shelf.”
The UAE could be an ideal location for development, according to Steve Griffiths, senior vice president of research and development at Khalifa University in Abu Dhabi.
“There is the funding and the ambition, and it’s also a climate where soft mobility — walking and cycling — is harder to push,” says Griffiths, who consulted on the Masdar City project, a purpose-built sustainable city in the UAE that featured a PRT system. “Most times of year people don’t want to be outdoors so a climate-controlled system with a few passengers together could be a solution.”
But Griffiths cautions that as such systems vie to replace traditional road-based transport they could yet be rendered obsolete by new generation technologies.
“Dubai and Abu Dhabi are tapping into a lot of different systems; vertical takeoff and landing vehicles, aerial taxis, autonomous electric vehicles,” he says. “They are facing a lot of competition.”

Without smart transport networks, smart cities’ potential will not be realised