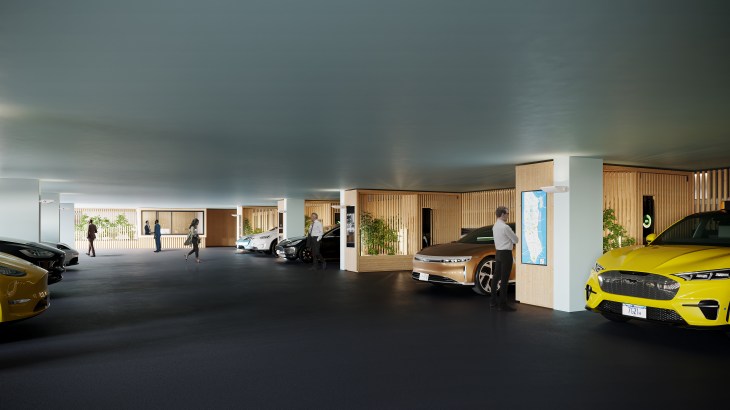 The company, which was founded in February this year, announced its construction project to convert an indoor parking garage in the middle of Manhattan into a public EV fast charging hub. When the 29-space garage on 42nd Street, which Gravity is leasing from real estate firm Related Companies, opens within a few weeks, it will be the island’s first dedicated EV charging space. Based on Gravity’s plans to scale, it won’t be the last.

“We’ll probably see five to 10 fast charging sites of different capacity in Manhattan over the next six months or so,” Moshe Cohen, Gravity’s CEO and founder told TechCrunch. “We’ve gone with Con Ed to dozens of sites in the five boroughs. We’ve surveyed the power grid and have plans to scale because it doesn’t work as a one-off. It works with scale, with coverage areas.”

Finding a place to park your car in New York City is a nightmare in and of itself. Finding a park and a charge for your EV is like finding a unicorn, and probably an expensive unicorn at that. Most of NYC’s EV charge points are behind the literal paywalls of parking garages, where you might find one or two Blink or EV Connect chargers nestled into a sea of ICE vehicle parking spaces. With Gravity’s hub, parking is free while cars are being charged. The only cost is that of electricity.

Gravity is not the first to recognize the problem of charging electric vehicles in an urban core. Electric mobility company Revel, first known for its shared e-mopeds around New York City, opened the city’s first public fast charging hub in an outdoor lot in Brooklyn this past June. Con Edison, New York’s electric utility company, has supported both initiatives with its electric vehicle charging incentives and rewards.

For Gravity’s site at Manhattan Plaza, the company worked with Con Ed to pull spare capacity power from two separate utility rooms on 42nd Street and Ninth Avenue, bringing in around 2,400 amps of power, which Cohen says is extremely rare to have condensed in one place in any city, let alone New York.

Cohen said he spent a long time location-scouting before choosing this as Gravity’s first spot, and proximity to power wasn’t the only game changer here. The site has its own dedicated entrance off 42nd Street and falls right between Ninth and Tenth Avenues, which is not only close to Times Square and the heart of the city, but also to the Lincoln Tunnel, which provides access to and from New Jersey.

“Our vision is we are bringing infrastructure to all the places that cars are right now, so if you’re in our coverage area, you should never have to worry about charging your vehicle, because it’ll get charged where it’s parked,” said Cohen. “So if you think about dense urban areas like Manhattan or downtown Chicago, where are cars parked? They’re either on a curb or they’re inside parking garages, and they’re very space constrained. And so you have to design different equipment that deals with the space and power constraints in order to have charging happen in all those places.”

Design is a big part of Gravity’s business model, from the design of the space itself to the charging equipment. The company says it’s collaborating with Jasmit Rangr, an architect who is known for integrating his buildings with the landscape, climate and environment, in order to transform garages into attractive and welcoming spaces that house clean electric vehicles.

“The whole area is for EVs only, so it’s really a chance to showcase an experience around what the world would look like if parking areas for cars had no pollution or oil spills,” said Cohen.

Indeed, the renderings do look pretty flash — not at all the dark, creepy, petrol-smelling caverns that one associates with city parking garages. Gravity says Rangr also integrated interactive touchscreens into the designs of the various spaces the company is building out around NYC. The touchscreens are designed by Gravity to help users adjust and monitor their vehicle’s charging as they wait amongst the light-filled wooden car cubbies and try to decide if the plant décor is real or fake.

Providing standardized and simplified equipment was a big concern for Cohen, as well. He says the current model for public charging equipment in most cases includes an amalgamation of software, hardware and payment processing that are not very well integrated. Gravity has worked with an unnamed manufacturing partner to consolidate those segments and create a more seamless user experience, and that includes what’s happening on the back end of the charge, according to the company.

Gravity’s first site will accommodate about 22 fast chargers, three intermediate chargers and a few slow chargers. All of the fast chargers are up to 180 kW, which means that even when two vehicles are plugged into one installation, each plug can do 90 kW of energy. Cohen says anything below 80 kW isn’t truly fast charging, and many of the companies that claim they offer fast charging are really only able to put out around 62.5 kW. Cohen also says by sending that current through 400 amp charging cables, even smaller volt batteries like those in Teslas can receive more than 80 kW.

The intermediate chargers use about 24 kW to 30 kW equipment and charge cars within one to three hours. The slow chargers charge overnight or within six to eight hours using 11 kW equipment.

Many of the parking spots will be taken up by Gravity’s fleet of Tesla Model Y Yellow Cabs, which will charge overnight, says Cohen. Bringing a fleet of electric taxis to NYC was actually the impetus behind building charging infrastructure. Cohen has a soft spot for the Yellow Cab as an institution and wanted to come up with a way to give it a Renaissance, but realized he’d need to set out on the hard task of charging a fleet. Cohen says Tesla gave Gravity the greenlight to use its Model Ys as taxis, but NYC’s Taxi and Limousine Commission (TLC) has yet to approve that particular vehicle as a yellow cab, according to a TLC spokesperson.

“I talked to all the major charging equipment companies, and I quickly realized that there’s no charging equipment that is set up for charging fleets, and I realized the extent of the problem,” said Cohen. “We started thinking about infrastructure because the model just does not work without infrastructure and a yellow taxi using a Model Y requires high levels of utilization and scale.”

There are currently 18 Tesla Model 3s and one Kia Niro EV operating in NYC as taxis, but none of them are yet run by Gravity. Cohen says Gravity is expecting an MoU from the TLC in the coming weeks to continue its Model Y pilot program, but TLC says Gravity was never approved as a pilot participant. The agency has not yet responded to further clarification as to whether or not it’s in talks with Gravity.

Sound familiar? A few months ago, Revel got caught also launching a fleet of Model Ys and attempting to operate a ride-hail service with them, but the TLC has been trying to shut it down.

In the meantime, Gravity wants to ramp up installing equipment at scale so that it can then grow its fleet.

“People think of mobility as this drain of cash and nobody has figured it out,” said Cohen. “I actually think that mobility and infrastructure are going to get solved together, and you’ll be able to make margins off utilization that are generous.”

Update: This article has been updated to reflect new information from TLC about its electric vehicle pilot.

Source: Gravity is launching an indoor charging hub in NYC with plans to scale | TechCrunch

Keolis Downer to roll out largest e-bus fleet in Queensland

Qualcomm talks up its ‘IoT-as-a-Service’ offering