Harnessing the full power of fibre in a changing world

This special report is in association with Fotech Group.

Distributed acoustic sensing builds upon critical fibre infrastructure and can improve city management and protect critical infrastructure. And that’s scratching the surface of its potential.

Fibre underpins the modern city, carrying data to and from citizens and companies. Data drives our lives, but fibre can provide much more than gigabits per second. Fotech has deployed its Distributed Acoustic Sensor (DAS) equipment to enable a myriad of use cases, from traffic management and threat detection to locating faults. As smart cities become more sophisticated, and cities and corporates require more granular data, harnessing information from fibre networks becomes a clear solution.

DAS upgrades a traditional fibre optic cable to contain thousands of vibration sensors, akin to placing an army of microphones along the likes of a pipeline, a road or a building’s perimeter. Lasers shoot thousands of pulses down a cable per second. A minor proportion of this is reflected and any disturbances will be picked up by the sensor. Each kind of disturbance has its own signature and advanced algorithms in the technology can tell an operator what happened, exactly where it happened and when it happened.

Take roads, the original arteries of the modern city. A fibre cable laid alongside a road and equipped with the DAS technology can pick up vehicle movements, determine the size of vehicles using the roads, work out where congestion forms and its type, assess the state of the infrastructure and also identify unexpected works.
From there, local authorities can improve journey times and air quality through congestion management methods, be alerted to bottlenecks on slip roads that could cause accidents, get information on infrastructure usage, where motorists are jumping red lights, or trespassing, as well as protecting pipes and cables from harm.

This special report will explore three use cases of Fotech’s DAS technology, but these only scratch the surface of its potential.

Existing traffic tracking technology has its shortcomings; both point sensors and cameras are fixed and have limited fields of view, while in-vehicle sensors that track location data do not give enough granular detail. Floating point data can give average waiting times at a junction, but the data is not delivered at a low enough latency to change traffic lights to improve vehicle flows. However, DAS connected to a roadside fibre cable can continuously track vehicles travelling over several kilometres of road. This capability means it can detect where a traffic jam starts and ends at any point, change traffic lights to ease congestion and warn motorists of queues ahead.

Fotech worked with Spanish infrastructure and engineering company COMSA that wished to determine how DAS could manage traffic at roundabouts and whether it could help to change the sequencing of traffic lights to improve congestion. A trial of DAS was set up along a five kilometre stretch of road through open countryside, a light industrial area and the Catalonian town La Bisbal d’Empordà, tapping into roadside fibre in a microtrench and then fibre underneath the roadside pavement in the town. The test aimed to thoroughly test DAS’s capabilities for a traffic management system and determine the limits of its sensitivity. 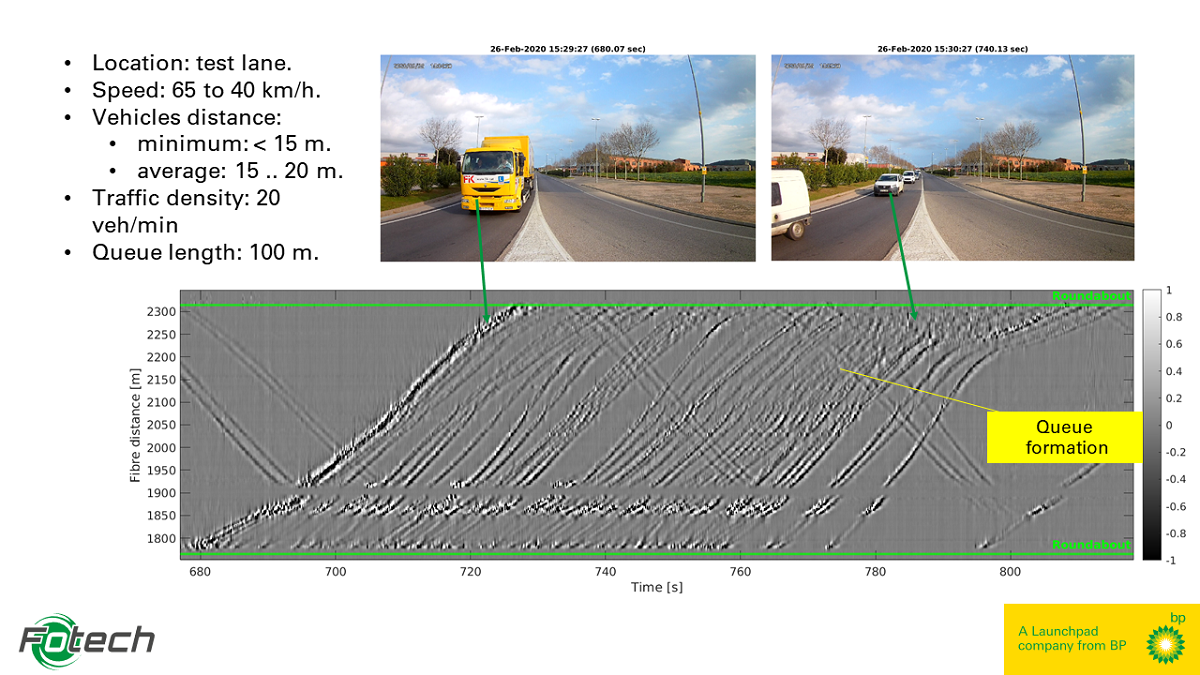 During the day, Fotech and COMSA measured regular traffic flows through a combination of DAS and GoPro cameras (for the checking of findings) at specific points along the route. It also measured the movements of pedestrians, cyclists, and the vibrations of an old stone bridge along the route. At night, a 500 metre stretch of road between two roundabouts was closed to run a series of tests. These ranged from tracking different methods of braking and accelerating, as well as running simulated traffic queues. Each of the parameters was changed one by one to understand how much the sensors were able to measure.

Analysis of the data is ongoing but it is already clear that DAS can be used to track the movement of vehicles in both directions without interruption along an entire stretch of road, as well as deliver sufficient information for a sophisticated traffic management system. The technology can determine the size of vehicles and the speed at which they travel in addition to identifying bottlenecks and the length and growth-rate of queues. Fotech is continuing to assess the data to determine further use cases.

In the meantime, it has started working with a traffic management company to build a fully integrated solution that can control traffic lights and smooth the flow of traffic through a road network. An additional benefit of the system will be reducing emissions and increasing air quality because of fewer traffic jams. Real-life testing of the solution is expected to launch in the coming months.

Cities have a complex network of buried pipes and cables in addition to tunnels from the likes of power utilities, telecoms operators and pipeline providers. Third parties may be unaware of their existence, vandals may wish to deliberately damage them, or the infrastructure is so valuable it is of interest to criminals or terrorists. In any case, the infrastructure can be accessed by either manhole cover or digging.

Fotech’s DAS technology can be used in this context by using optical fibre that is part of an underground cable or fitted close to the pipeline or tunnel as a means of detecting any nearby activity. Artificial intelligence is used to recognise each unique signature of each kind of activity and an alarm will be raised in the event of anything concerning. An infrastructure provider’s security team will be notified of what has happened and its precise location within minutes or even seconds.

Criminals have become increasingly sophisticated in their methods

The technology can also be integrated into other systems, such as allowing cameras to automatically turn towards the activity or a drone to be automatically deployed to act as a deterrent. These upgraded security systems enable employees to assess a breach remotely before having to physically visit an area.

Criminals have become increasingly sophisticated in their methods of tapping into underground pipelines, often tunnelling from a distance away from the infrastructure. Increasingly complex technology is being used to avoid existing security methods. One example of DAS technology being used to protect valuable liquids was in India, where a robbery attempt was made by digging from a building 20 metres away from a buried pipeline.

However, Fotech’s technology identified the attempt to tap the pipeline through detecting sporadic and subtle digging activity over several nights. The pipeline’s leak detection system located the breach to within a 500 metre area but by integrating it with Fotech’s own technology, it was able to reduce this to a 10 metre section where the tunnelling activity had been detected. 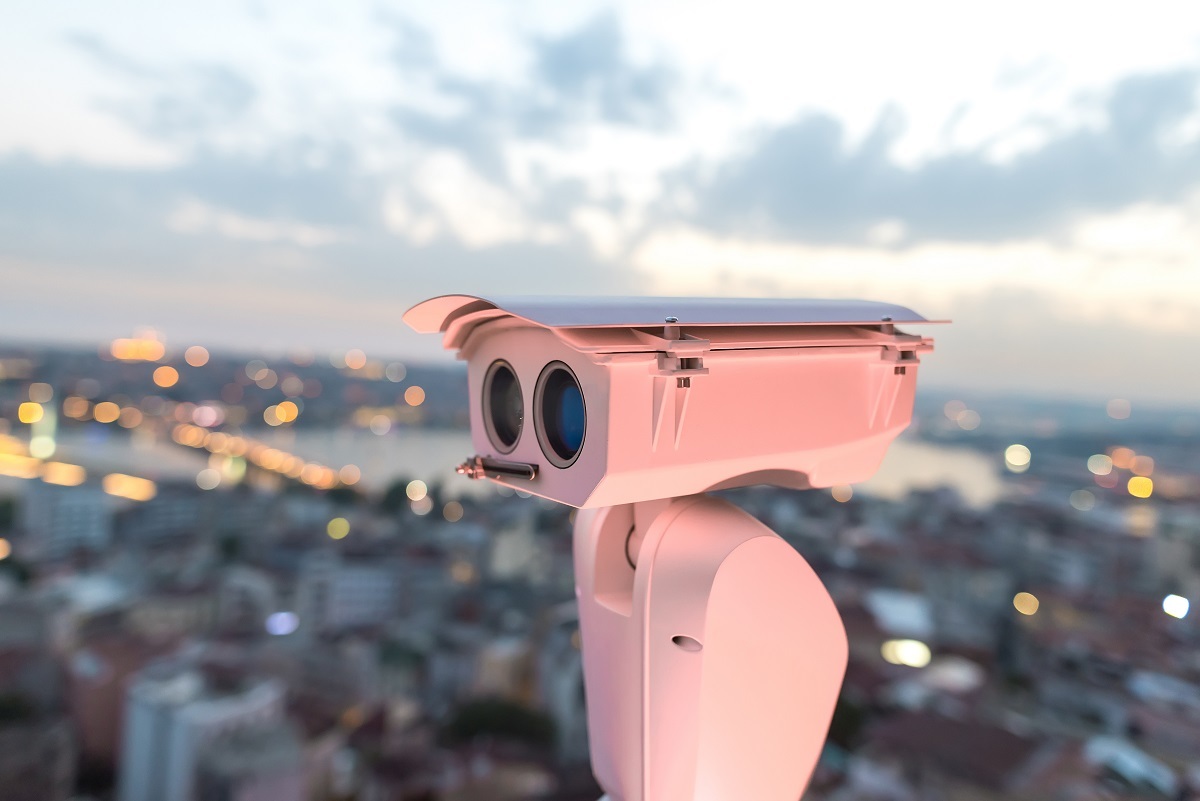 Another example was in South America, where Fotech’s tech picked up an unexpected signal within a rainforest. The pipeline was prone to theft and hot tapping but that area’s remote position and lack of notification of planned work meant the pipe operator found it hard to believe they faced a threat. However, on the insistence of Fotech, which said the site needed to be visited because the vibrations dovetailed with human activity, the operator discovered a seismic team drilling boreholes about to place explosives dangerously close to the pipeline to support its own exploration work. Because of a GPS malfunctioning due to the effects of the tree canopy, the team was some way from their intended destination.

These examples illustrate how DAS can form the foundation of wider systems, with the technology detecting the activity and a provider’s own security processes determining whether their infrastructure has been breached.

DAS’s strengths in detecting threats to critical infrastructure are also transferable to faults. In many cases, critical infrastructure lies in remote and frequently hostile locations, whether deep underground or undersea. Cables in such areas can be damaged by unexpected water or ground movement. Because of their location, the risks from excavation can be serious and can result in fire or electrocution.

Finding faults can be time-consuming and can cause further damage to infrastructure by “thumping” the cable with an electrical discharge to reveal the issue. This method requires engineers to spend a considerable amount of time in different locations to find where the arcing on the cable occurs. In many cases, this infrastructure is critical, so downtime needs to be minimised.

To give one example of how DAS can help operators identify faults in remote infrastructure, in an offshore cable operator detected an issue in its export cable from an offshore windfarm. Undersea cables face a particularly hostile environment. Seafloor currents can erode the protective seabed layer. An exposed cable can then drift or vibrate, initially causing damage but potentially causing it to break through strain.

Fotech’s Helios DAS solution was used to determine the precise location of the fault along the cable. An anchor chain was dropped to the seabed offset from the cable but near the fault. The vibrations were then picked up by DAS and correlated with GPS. Because of the precise nature of this data, divers were able to target the general fault location and start “tapping” the cable to generate an acoustic signal. This signal further refined the location of the fault and as a result engineers only had to remove 3.5 metres of cable. The cable could be repaired with a single splice and without additional cable because Helios DAS was able to identify the exact location of the problem.

Helios DAS’s other advantage is speed compared to conventional fault finding and repair methods. In this case the weather turned for the worst immediately after the cable was repaired. If traditional repair methods had been used, work on the cable would have had to be postponed for a month, costing the company millions of pounds in lost productivity.

Another example of the technology being used was when a fault was detected in an underground cable between two power stations. Flashover testing in conjunction with DAS pinpointed the fault, allowing the repair team to quickly solve the problem. Using DAS meant that only one flashover test had to be carried out. This provided an additional advantage to the asset owner because flashover testing can lead to secondary damage on a cable.

Other uses of the technology in this context include the ability to detect the deterioration of a railway line as more trains travel over it, as well as determining the effects of a pothole developing in a road or general subsidence.

The evolution of DAS

These are live deployments of the technology, but its potential will only grow as smart cities become more sophisticated. Fotech is currently exploring how machine learning can extract even more data from DAS data. It is looking to see how DAS systems can be optimally deployed throughout cities. And it is working with telecoms companies to get access to their fibre infrastructure and help them to further monetise their networks. The expectation is that DAS’s advantages will lead to further fibre deployments in areas where sensing would bring new services.

As cities evolve and become truly smart, DAS will play a key role in supporting value-added services. While the shorter term benefits include traffic management, which will be an increasingly important area as cities rethink their public transport networks in the wake of the coronavirus, in the medium term a city could explore how weather or public events affect a city. Looking further ahead, DAS could predict the effects of building new infrastructure in a city or be central to decision making such as introducing a congestion charge.

Data is at the centre of our lives. It connects us, enables relationships, fuels businesses and innovation. Fibre is the foundation of that and what DAS demonstrates is that fibre can be further evolved to help run traffic networks, to protect critical infrastructure and change the ways cities operate.

The IoT industry is broken, but can it be fixed?

MIT works with cities to use Bluetooth tech in virus fight