India has made headlines recently as the country has overtaken the UK, its former colonial master, to become the fifth-largest economy in the world. As part of the constant tricks orchestrated by Western countries led by the US to contain China’s development and guide foreign investment to other markets, Western media sources have been boasting that India could become the “next China,” which makes India believe that it can surpass Germany in five years and Japan in another two years.

While the Chinese and Indian economies were almost equal as recently as 1990, China’s nominal gross domestic product (GDP) reached $17.7 trillion in 2021, which is about 5.7 times that of India’s $3.1 trillion. How did such a gap between the two most populous economies grow? What are the myths surrounding China’s development miracle? Will India succeed in following China’s path and become the world’s third-largest economy soon?

An analysis of the economic trajectory of the two Asian neighbors showed that China’s takeoff was a result of joint factors including building a foundation of socialism with Chinese characteristics as well as its watershed event of reform and opening-up, while India’s GDP scale is far smaller compared with China’s and internal complexities further dim its economic prospects.

As two large developing Asian economies with similar populations, China and India both started from scratch after being battered by wars and colonization. In 1947, India became an independent nation from the British Empire, while two years later in 1949, the People’s Republic of China was founded.

The historically significant reform and opening-up policy began in China in 1978, whereas India began to make revolutionary changes to its economic policy in 1991, to open the economy to trade and foreign investment.

China’s reform and opening-up elevated the country from a low-income status, and the country’s GDP skyrocketed.

Since 2000, China’s total GDP successively exceeded those of Italy, France and the UK, and surpassed industrial behemoth Germany to become the world’s third-largest in 2007. Despite severe global recessions since 2007, the Chinese economic engine maintained rapid growth, eventually overtaking Japan as the world’s second-largest economy by nominal GDP in 2010.

During the same span between 1990 and 2021, China has maintained an annual growth rate of over 9 percent on average. Over the same period, India saw its GDP grew by an average of 5.9 percent, but with fluctuations, for instance, a contraction of 6.6 percent in 2021.

World’s factory vs back office

Though both enjoyed dividends derived from globalization, China and India embarked on different growth modalities driven by the manufacturing and service sectors, respectively, conforming to their respective domestic  situations. China has long been dubbed the “world’s factory,” whereas India is known as the “world’s back office.”

“As there is a saying in China that ‘To build fortune, roads should be built first,’ China has found its own way of development, through building infrastructure first. Extensive aviation, shipping, railway, and road networks ensure smooth and efficient logistics’ handling, while an abundance of highly skilled workers has paved the way for rapid development of the manufacturing industry,” said Lou Chunhao, executive director of the Institute of South Asian Studies at the China Institutes of Contemporary International Relations.

For four decades, the pioneering and trailblazing spirit of China’s special economic zones has been passed on, and fueled the country’s drive toward economic prosperity. In the process of becoming the “world’s factory,” China has formed a network of city and industrial clusters, for example, the Pearl River Delta region in South China for the manufacturing of IT and electronics, textiles, and toys, and the Yangtze River Delta region in the east coast focused on automobiles, chemicals, and electronics.

Moreover, China has been willing to embrace the world with open arms and actively build open cooperation networks. Since joining the WTO in 2001, China has signed 26 free trade agreements (FTAs) so far, among which 19 agreements have been implemented already.

“On its road to becoming the world’s fifth-largest economy, India has seized the opportunity of information reform as well as the advantage of a larger number of its people who can speak English, to become the ‘world’s office,'” Lou told the Global Times.

Since the 1950s, India has been spending a lot in establishing a total of six Indian Institutes of Technology, copying the MIT format, to nurture talent for the country’s IT empire.

In the 1990s, India released a variety of incentives to boost the development of the country’s IT industry, including 100 percent shareholding of foreign investors and tax exemption on software exports. India’s software and services exports had been rising rapidly. Software exports made up around 20 percent of India’s total export revenue in 2003-04, up from 4.9 percent in 1997, public data showed.

However, during the similar economic climbing stage over the last few decades, India was mired in political instability, which was also reflected in some central strategies and policies that couldn’t be properly implemented at the local level, Qian Feng, director of the research department at the National Strategy Institute of Tsinghua University in Beijing, told the Global Times. 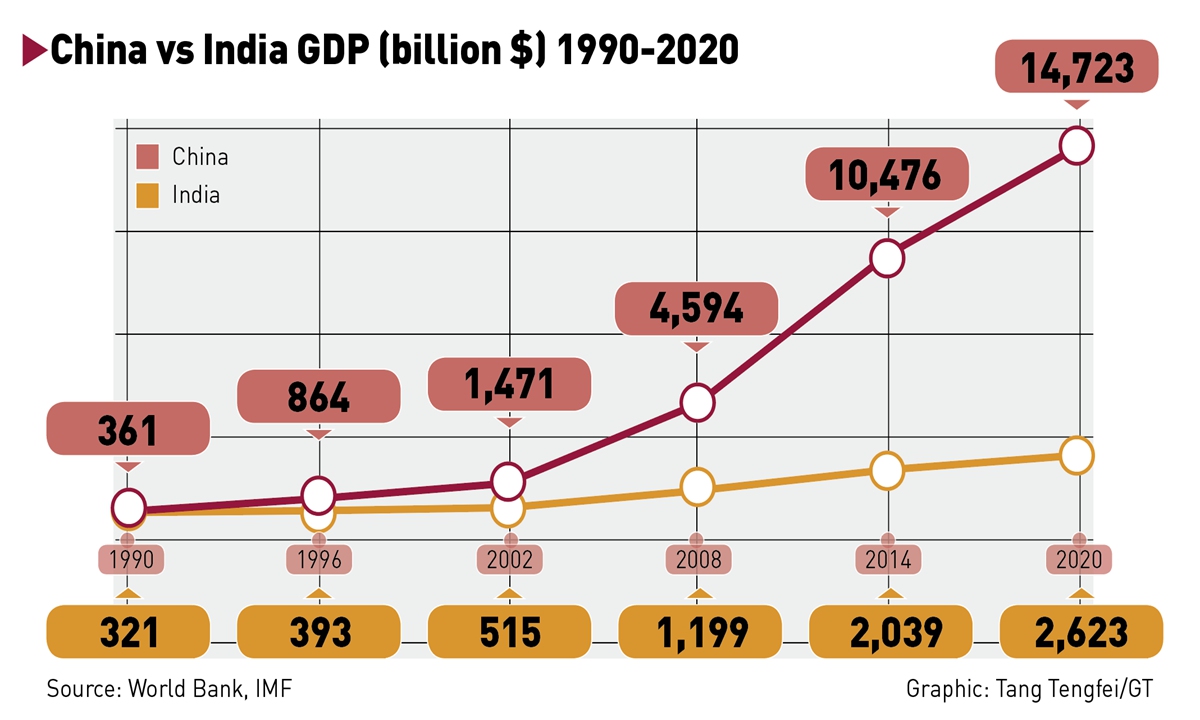 Sources: World Bank, IMF
“Some global enterprises are still under pressure to move out of India partly due to the government’s frequent abuse of its law enforcement power, and the fact that India’s ruling party still has limited influence in some regions,” Qian said.

India’s population is expected to grow by 273 million between 2022 and 2050 and India may overtake China as the world’s most populous country by 2023, according to the UN World Population Prospects 2022 released in July.

However, whether India can take full advantage of its demographic dividend is uncertain considering it still faces many challenges. India’s uneven social security, inadequate education resources, and overburdened medical services may all pose serious constraints to the realization of India’s “demographic dividend,” according to experts.

On the one hand, a large number of CEOs of Indian descent are running some of the world’s top companies. On the other hand, India stands out as a “poor and very unequal country, with an affluent elite,” where the top 10 percent of the population holds 57 percent of the total national wealth, while the bottom 50 percent holds just 13 percent as of 2021, read the World Inequality Report 2022.

Unlike Chinese workers who are highly productive, India, which has the largest number of youth in the world, has only a mere 2.3 percent of the workforce that’s gained formal skill training as per the Periodic Labour Force Survey of 2018.

Workers make circuit boards at a factory in New Delhi on May 23, 2022. Photo: VCG

On top of elbowing into the top five global economies, India also posted a remarkable GDP growth rate during the April-June quarter, surging 13.5 percent, according to data released by the country’s statistical office. Boosted by the sound performance of India’s economy at the moment, the State Bank of India estimated that India is expected to top Germany in 2027 and overtake Japan by 2029, Indian news outlet The Economic Times reported.

Given the timeline of the above projections, it seems that India has been following China’s economic trajectory but with a 20-year time difference.

However, experts have expressed doubts on whether India is able to attain its goal over the next 10 years given multiple uncertainties. “India has missed the best opportunities brought about by hyper-globalization, with the COVID-19 outbreak hastening the fracturing of the global economy leading to the declining of the global division of labor,” Wang Yiwei, director of the Institute of International Affairs at the Renmin University of China, told the Global Times on Tuesday.

Though India still enjoys dividends as its infrastructure sector has just gotten started and the information era is set to begin, the sustainability of India’s high-speed growth remains uncertain because a fractured India hinders the flow of production elements and, accordingly, it is unable to create a complete industrial system parallel to China’s, Wang said, noting that Japan has also set the goal of making a 5G transition to maintain its competitive edge.

To become a global economic power as it is today, China saw its GDP maintain over 10 percent growth for years, whereas it’s rare for India to post a GDP growth of 8 percent for a consecutive two years, let alone the fact that the South Aisha economy faces many challenges ahead, Qian said.

“India is unlikely to rise to be the third-largest economy following the pace of China until it solves internal problems including controversial land rights, political stability, and an unfair and opaque business environment,” Qian said.

“In recent years, China has ramped up efforts to promote long-term, high-quality economic growth and social prosperity, with nearly 800 million people being lifted out of poverty over the last 40 years. Amid a widening domestic wealth gap, India should improve its overall national governance rather than only seeking rapid growth,” Lou said.

Moreover, rather than siding with the West, India should develop friendly cooperation with neighbors including China, as only an Asian miracle could lead to sustainable economic prosperity in regional countries, he said.