Back in January, much of the talk at CES® centered on the inevitable 5G world, which promised to change just about everything in media, advertising and marketing.

Thus far, the 5G revolution is perhaps taking a bit longer than we might have guessed upon leaving the annual Las Vegas gathering. But that hasn’t stopped consumers from gobbling up new forms of digital technology in huge numbers, nor has that stopped them from radically altering their own entertainment and information habits.

The Consumer Technology Association (CTA)® found that the industry has enjoyed double digit revenue growth over the past two years (up 12% in 2017 and another 10% in 2018), but hardware sales cycles are getting longer. That is, in 2019 most people who want smart TVs, smart phones and PCs have purchased these devices, and they are replacing them less frequently.

Increasingly, the consumer technology business is strengthening alongside software and services business, which has broad implications for marketers. The more software in the home, theoretically the more connection points and data vehicles are available.

Beyond that larger shift, there are numerous trends for marketers to apply to their day jobs.

In just a few years, we’ve gone from an internet where most content was free to one where tens of millions of people pay for subscription content services. We’ve seen this play out in video with the explosive growth of Netflix (nearing 150 million subscriptions, per CNN.com) and Amazon, as well as in music with Spotify (which now has over 100 million subscribers globally, per Bloomberg). In a nutshell, streaming technology, coupled with the massive growth of smartphones and smart TV, has completely reshaped entertainment.

In the U.S., consumers are projected to spend $32.3 million on music and video streaming services in 2020, versus just $7.3 million in 2015, the report found. Despite a slowdown in television sales, consumers are upgrading their sets to smarter and higher resolution displays. By 2023, 68% of digital display shipments are expected to be 4K, and 8K sets will hit the market this year. Over 70% of displays shipping this year are smart TVs that enable access to hundreds of streaming services. 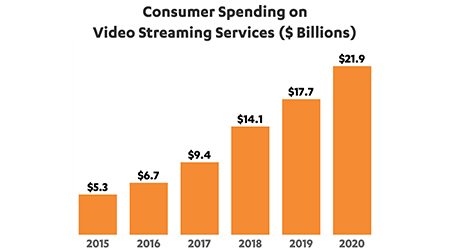 The cumulative effect of this home entertainment innovation is a decline in attendance at theatrical movies and live sporting events. According to The New York Times, summer movie attendance slid 5% this year versus 2018. Similarly, Major League Baseball attendance dipped by 4% in 2018 and is expected to decline again this year, reported USA Today.

During the next year, new streaming TV services from major media and technology companies are expected to add even more viable options to the mix. For example, Apple TV+ and Disney+ are launching their services this fall. Streaming video service revenues will surge by 25% this year, reaching $17.7 billion, predicts CTA.

This will all make it tougher on marketers, as consumers are gravitating toward ad-free environments.

2. Cable boxes are being replaced by streaming devices, which could potentially shake up TV advertising.

As cord-cutting accelerates, cable and satellite companies are shipping out fewer boxes to people’s homes.

This has been a trend for several years, as streaming video has taken hold.

From 2016 through 2020, CTA predicts that the annual revenue from cable set-top boxes will slide from $1.6 billion in 2015 to $1.3 billion in 2020. Meanwhile, the revenue from streaming devices is expected to climb from $905 million to $1.1 billion over the same five-year period.

This gradual shift will accelerate the growth of both ad-free and ad-supported streaming. It will also likely shrink the pool of homes that can be targeted through addressable TV ads, while accelerating connected TV advertising.

We’re already seeing this play out in the ad market. eMarketer predicts that $2.54 billion will be spent on addressable TV ads in the U.S. this year, an increase of 23% compared to 2018, but markedly down compared to the 69% growth recorded during the previous year.

3. Voice-activated digital assistants are becoming mainstream, and soon you’ll be able to talk to everything.

It’s quickly becoming clear these devices are not restricted to high-income technophiles, but rather are appealing to all demographics.

That reality has only ratcheted up the need for brands to master new forms of voice-enabled marketing and advertising. Currently, voice ad tactics are still limited, but there’s an opportunity for brands to experiment and innovate. Successful marketers know they must reach customers where they are, and CTA’s data show consumers are increasingly engaging with voice-activated digital assistants, such as Amazon Alexa and Google Assistant.

4. Voice capabilities are becoming a new staple for multiple forms of technological devices.

Smart speakers are not the only vessel supporting these helpful AI entities. CTA predicts that more than 400 million voice-enabled products will ship in 2019. The brands that can figure out how to play in this world, where people are talking to multiple products in their homes, can win big.

But there’s also the issue of a lack of uniform software tying all these voice products together, which will make it a challenge for marketers.

5. Here comes a new screen in the house.

As smart speakers have become nearly ubiquitous, CTA expects shipments may have peaked; the category is estimated to reach 35.2 million units this year. However, just as that category settles in, shipments of smart display speakers — think smart speakers with small video screens — are expected to jump 17% this year to over 5.1 million units.

The more these screens are in people’s living rooms, the more opportunities for brands to connect with people when they are at leisure or making at-home purchase decisions. 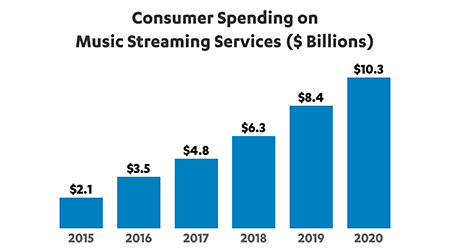 Consider the widespread use of wireless earbuds. Annual revenue for these products is projected to nearly double over the next few years, topping $3.6 billion by 2023. People are increasingly spending their time in audio bubbles — perhaps creating a new media use case for marketers to explore.

For instance, this could be a powerful accelerant for podcasting and podcast advertising. Already, podcasts are projected to be a billion-dollar ad market by 2021, according to the Interactive Advertising Bureau (IAB) and PwC this year. What’s more, companies like Spotify are making acquisitions to lock up content and distribution.

7. 5G adoption won’t happen overnight, but it’s likely to kick off a content and advertising revolution in mobile.

5G is in its nascent stage as the first handsets and service plans hit the market this year CTA predicts that sales of 5G handsets will take off in 2020, with 20 million units shipping to U.S. dealers. Wireless carriers are rolling out their first 5G services this year in select cities, but it will likely take a few years for 5G to be broadly adopted.

The new ultra-fast speeds in the next generation of wireless will likely drive a surge in mobile content of all types — audio, video, gaming and more.

Mobile content boomed during the 4G revolution, which correlated with a large influx of mobile ad spending. 5G is not only expected to provide a major boost to advertising; it will likely introduce entirely new business models that can help marketers and advertisers reach their audiences quicker and more efficiently.

Just in the past few years, we’ve seen massive growth of mobile-first content, such as original series built for Snapchat, new formats as Stories on both Instagram and Snapchat, as well as a slew of social video shows designed to be consumed in news feeds on mobile devices.

At the same time, mobile gaming — thanks to titles like Fortnite — has continued to expand its demographics and share of media time. 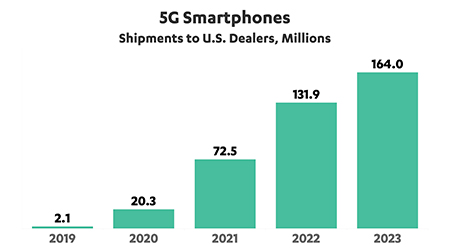 It’s also possible that we’ll see more mobile content from wireless companies trying to gain an early foothold in 5G. For instance, it’s conceivable that AT&T, which recently spent $85 billion to acquire Time Warner, will lean on its deep roster of entertainment and sports networks to create 5G-driven content as a means to drive subscriptions.

As 5G takes hold, it should only unlock more consumption, more investment and new content genres. Theoretically, consumers will be able to watch high-quality video on a multitude of devices — whenever and wherever they want.

All this new consumption and premium content should attract more advertisers. Typically, mobile advertising has been driven by local search ads, small businesses and mobile apps advertising their own products. It’s likely that 5G will usher in a wave of brand advertising, especially as marketers look to replace declining traditional pay TV audiences.

Although they have their share of differences, the technology industry and the media/advertising sectors share this key trait: in 2019, nothing is static about the way they operate. Certainly, in the tech world, hardware sales are still dominated by huge TVs and slick mobile devices, and that will surely continue to be true at CES 2020. Along those same lines, many traditional marketers still — almost habitually — allocate the bulk of their spending to traditional TV and the digital duopoly.

But if the past several years — if not months — have shown us anything, it’s that consumer trends are so volatile that neither industry can afford to stand pat. The year 2020 promises to be equally as unpredictable. Whether it’s the inevitable emergence of more smart home tech or the long-awaited breakout of VR entertainment, or the coming pitches among giant media companies for streaming dominance, marketers and tech firms need to be nimbler, more creative and more innovative than ever to keep up with shifting consumer habits.

Marketers should pay attention to these 2021 trends

Make sure your sales team is ready for 2021

Zen Media’s Shama Hyder on why brands should go live

How to get the most of marketing? Make a plan