Hey! The world does not owe you a living! And the truth hurts.

Many unemployed graduates given allowance and training under Skim Latihan 1Malaysia (SL1M) are lazy and drop out very fast.

He said it was not surprising that the majority of unemployed graduates had been found to be unsuitable for employment.

“Malaysian employers had been lamenting that they are lazy and incompetent with tremendous attitude problems over work. I guess the problem is now acute over the past decade or two,” he added.

Syed Razak said the problem was also a sign of “deteriorating family values, of lacking mentoring quality by parents in raising their children to become responsible adults with the right attitudes as a working adult”.

“Parents are not solely to blame for such lazy unemployed graduates with bad attitudes. Perhaps our educators and quality of education curriculum also contributed to this problem,” he added.

Syed Razak, who is Gerakan’s nominee to contest N.37 Bukit Lanjan in the coming 14th General Election (GE14), said the fact that employers had found so many of unemployable graduates in Malaysia showed that “something is not right in our education system”.

Here’s what was posted by online news portal The Malaysian Insight for you to chew on: 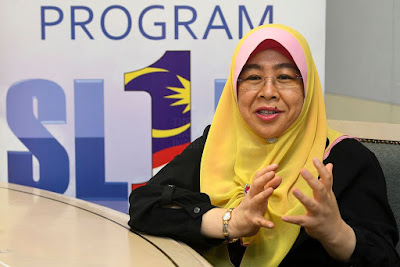 Skim Latihan 1Malaysia organiser Norashikin Ismail calls the current stock of young graduates the ‘strawberry generation’, who will up and quit when they are told off for doing their jobs badly. – The Malaysian Insight pic by Seth Akmal, November 20, 2017.

FOR many out-of-work graduates, laziness and unrealistic expectations are the main impediments to them getting employed, a training and job placement programme organiser said.

A high dropout rate of graduates who signed up for Skim Latihan 1Malaysia (SL1M) showed the problem with most of the jobless youth was not a lack of skill, but bad work ethics and attitudes, said programme organiser Norashikin Ismail.

“Some will show up for three days, and then run off. If they get told off by their bosses, they will run off,” she told The Malaysian Insight.

“They are all from the ‘strawberry generation’… when they don’t do their jobs well and their bosses tell them off, they take offence.

“They are very proud to be graduates, but they don’t want to do the work,” she said.

SL1M is a programme launched by the government in 2011. It aims to help unemployed graduates, especially those with a low-income background or who are from rural areas, by placing them in companies where they are learn new skills and know-how so that they have a better chance of securing a job.

Private companies that are awarded government contracts are required to contribute 1% of the sum they earn from the contracts to fund the programme.

Set up under the Economic Planning Unit within the Prime Minister’s Department, the programme is run by 16 volunteers.

Graduates are placed as trainees for six months to a year in selected government-linked companies and private corporations, which treat the programme as a corporate social responsibility (CSR) initiative.

The graduates receive an allowance of RM1,500 during the training.

Norashikin said many of the graduates expected to be employed afterwards by the companies where they underwent training, but most of them failed to meet even the most minimum of expectations.

“If you don’t show initiative, and don’t add value to the organisation, why would they give you a job?” she said, to explain why many graduates failed to be absorbed into the companies upon completion of their training.

Norashikin said while some of the jobless graduates clearly exhibited a lack of training and skill set, the bulk of the graduates were simply too lazy and demanding.

“To change their attitudes and thinking is a challenge for us, because that’s really up to them,” she said, adding that some trainees would even demand a higher allowance during training.

She said graduates who lacked skill, training and confidence were “easier” problems to fix.

“There are those who are poor, unattractive, unable to speak English. But if they have a positive mindset, it is easy to polish them up.”

As of October, 138,398 graduates have enrolled in the programme and have been placed have in companies nationwide.

The data on the number of trainees dropping out mid-programme was unavailable, said Norashikin.

Former SL1M trainee Wan Nurhusna Auni Sulaiman said many of her peers, who were jobless, thought she was foolish to sign up for the programme when she already had a job.

But the 25-year-old said she was keen to enhance her resume and wanted the opportunity to work in a larger corporation or GLC.

“I was willing to leave my industry. I was working in a small company as a programmer, but after two months, I realised the company was not stable.

“So I quit and joined the SL1M programme because I wanted to learn and get a better opportunity.”

Many of her friends, who remain unemployed, were not interested in joining her as they said there was no guarantee of a job after training.

“On the first day (of training), he looked happy and positive. He said it was great to be able to join SL1M. By the third day, he had disappeared.

“But because we have a social responsibility here, we called him and kept calling until we managed to get him because we were afraid something had happened to him.

“He refused to answer the calls at first and we were very worried. But he finally answered the phone and he apologised profusely, confessing that he was not a morning person and could not wake up in time for work.

“We were speechless. We couldn’t say anything to a reason like that.”

Illya said employees had the option of starting work at 8.15am or 8.30am.

“It’s not like you have to start work at 7am. We were shocked. And it’s not like there was work pressure because he had worked only two days. We hadn’t even given him any assignment,” she said.

Other graduates would submit their letters of withdrawal from the programme after a few days, stating they did not own a vehicle and therefore could not go to work.

“We are dealing with a new generation that will try out a job and if they don’t think it’s suitable, they will just quit,” said Illya. – November 20, 2017“

Anwar: Education must have soul and excellence