The press release didn’t put a number on it as that’s data they like to charge people for, but it did reveal some significant shifts among the main smartwatch vendors. Apple remains the clear leader with a 28% share of shipments, but Samsung is gaining ground and Garmin has suddenly turned into a bit of a wearables player. Meanwhile Huawei’s decline has tracked that of its phones. 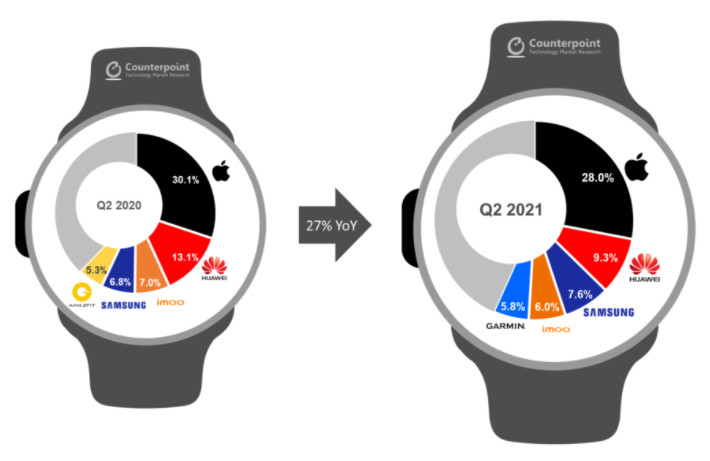 “Looking at the success of Apple Watch, more OEMs have entered the smartwatch market with a relatively less advanced OS but comparable fitness and health-related features, and stylish designs at affordable prices targeting hundreds of millions of potential users globally,” said Sujeong Lim of Counterpoint.

The only plausible mass market proposition for smartwatches from the start has been as feature-rich fitness trackers, but there’s a limit to how much most people will pay for a mere peripheral. Getting the price below triple figures always seemed key and it was just a matter of time until components became cheap enough for that tier to get the required feature set.

Try telling US Apple fans that, though. The global Apple Watch active user base has apparently crossed 100 million, the majority of it being Americans. Almost a third of US iPhone owners have decided to shell out for an Apple Watch too.

“The smartwatch attach-rates for smartphones have been steadily rising,” said Lim. “Apple’s ecosystem is seeing a greater attach rate as the brand continues to bake in attractive designs, health features and related services around it. Apple Watch’s user base crossed the 100-million mark for the first time during the quarter ended June, capturing the lion’s share of the smartwatch user base globally. The US continues to be the key Apple Watch market, contributing to more than half of its user base, with an attach rate of close to 30%.”

Here are the global best selling individual models in Q2 21. 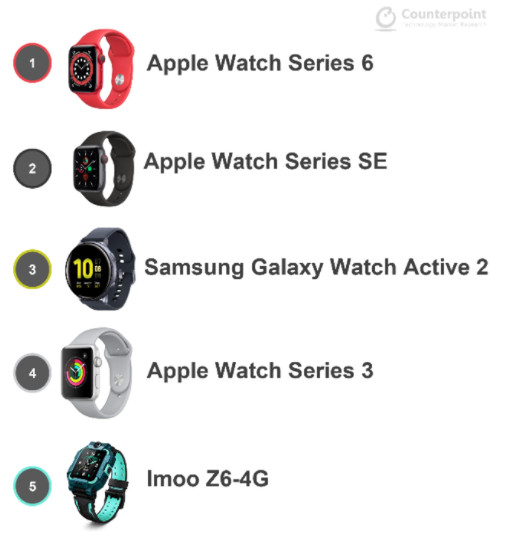