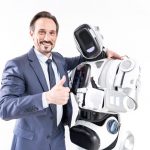 Such has been the hullabaloo around automation and the impact of technologies such as AI and robotics on the workplace, one would imagine we live in a world awash with fear of the looming jobs apocalypse.  In the Terminator style battle of the future, humans will band together and ward off the threat of the machines.

Alas, new research from Erasmus University suggests things might not be quite so straightforward.  The study suggests that many people would prefer their job to be taken by a machine than by a fellow human.

The study suggests that people tend to exhibit greater negative feelings when they’re replaced by someone else than if they’re replaced by technology such as a robot.  This is despite the fact that, at least if the various predictions are correct, we are more likely to be replaced by machines than we are by people, especially in the long-term.

“This is the first paper to explore the unique psychological correlates of technological unemployment. As more and more occupations are affected by automation, this is an increasingly important topic. Interestingly, when technology replaces human workers, it has a unique psychological effect. People realise that the differences in abilities between robots and themselves might not be short-lived but permanent, indicating skill obsolescence,” the researchers explain.  “We hope that, particularly in times when policymakers are discussing strategies intended to support workers who have been displaced by technology, our work encourages more research on the psychological consequences of technological unemployment before technological progress disrupts specific jobs and occupations.”

The researchers believe that their findings should help to prompt the development of programs to help people tackle the mental as well as the practical consequences of being replaced by technology, with the ultimate goal of buffering the negative consequences on one’s mental and physical health by re-employing them as quickly as possible.

The study suggests that people who readily attribute their job loss to technology would most benefit from skills development and retraining.  All of which does sound somewhat obvious, but as we gain a greater understanding of the way the 4th industrial revolution may play out, I suppose this study does add a degree of insight into the psychology at hand.

How to find the right leadership training

Try something new to get noticed when applying for jobs

Invest in the right talent to achieve sales growth