James Chin is professor of Asian studies at the University of Tasmania in Hobart, Australia.

Southeast Asia’s inability to escape the legacy of European colonialism is on show once again, with a French arbitrator insisting that Malaysia owes billions of dollars under a land lease agreement dating back a century and a half between a vanished sultanate and a defunct British trading house.

The lease would have seemed mostly a matter of interest to historians but is proving of real consequence. Under the arbitrator’s order, a French bailiff this week served asset seizure notices in neighboring Luxembourg over two Caucasus-based subsidiaries of Malaysian state oil company Petronas whose value has been estimated at $2 billion.

The origins of the case go back to 1878, when the sultan of Sulu, an island group between Borneo and the Philippine island of Mindanao, leased the eastern side of the present-day Malaysian state of Sabah in Borneo to a British trading company for 5,000 Mexican pesos (equivalent to about $1,200 today). The sum was to be paid each year to the sultan and his heirs in perpetuity.

The last recognized sultan, Jamalul Kiram II, died without direct heirs in 1936. The Sultanate of Sulu is also no more, with the islands today part of the Philippines.

Nevertheless, Malaysia continued to dutifully pay the annual levy to indirect heirs of the sultan until 2013. That year, a group of armed men calling themselves the Royal Army of Sulu landed in Sabah at the town of Lahad Datu to assert a claim to the state. The Malaysian authorities crushed the intrusion from Mindanao after a few weeks.

Legal claims by descendants of the last sultan were quietly revived recently, with the help of Therium, a litigation fund in London, according to the Financial Times.

An attempt to pursue the heirs’ claim through arbitration in Spain was quashed by a court there. The arbitrator then moved the case to France, later ruling for the heirs in the absence of any legal representation from Malaysia and concluding that the government owes them $14.9 billion in compensation.

While Malaysia will likely be able to suppress the arbitral award eventually, this case is a reminder that boundaries drawn in colonial times sit uneasily with more ancient cultural linkages.

Oblivious to the modern border between Malaysia and the Philippines, locals have traveled across the Sulu Sea for years. Malaysia set up an expensive new border force after the 2013 intrusion, but it has failed to stop the illegal movement of people between Sabah and Mindanao. Indeed, most of the foreign Islamist fighters who joined the seizure of the city of Marawi in Mindanao in 2017 arrived via Sabah. 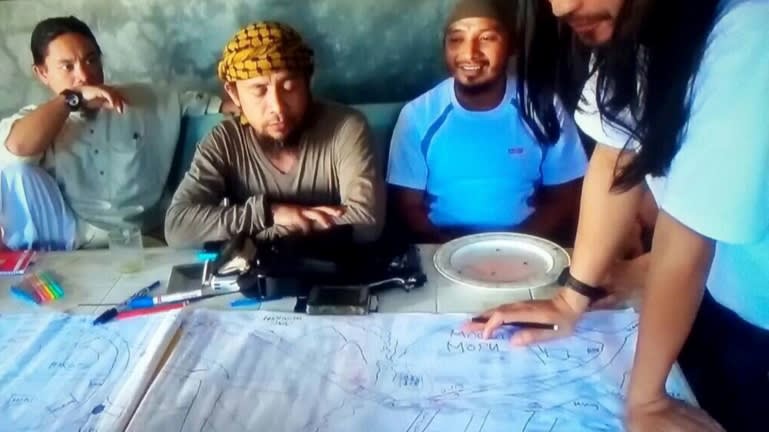 Militant leaders plan the siege of Marawi, the Philippines: Most of the foreign Islamist fighters who joined the attack in 2017 arrived via Sabah. (Handout photo from Philippine National Police)© AP

The modern land borders between Thailand and Malaysia, and between Indonesia and Papua New Guinea, are similarly ignored by many in those places.

Thailand’s ethnic Malay-dominated southern provinces have more in common historically and culturally with the northern Malaysian states of Perlis, Kedah and Kelantan than with other Thai provinces. Many Thai Malays illegally hold Malaysian citizenship, and smuggling is rife along the border.

Similarly, residents of Indonesia’s side of the island of New Guinea move back and forth across the border as they choose. Their natural instinct is to look east toward their Melanesian kinsfolk in Papua New Guinea.

It is no accident then that are also people living in these areas of Southeast Asia who support moves to redraw the colonial borders or to simply secede from the country to which they find themselves attached.

Malaysia’s legal victory thus will not resolve the reality on the ground. There is something about belonging to a place and place-identity that will ensure that the Sulu issue will persist.

For governments in the region, these situations represent a tricky problem. Authorities are not going to reopen border issues as that would lead to endless complicated side issues. But they cannot ignore the reality on the ground. No governments like porous borders, especially if their citizens on the frontier do not recognize them.

One way to deal with this problem would be to recognize these citizens as having legitimate rights when it comes to their kinship ties across official borders. In practice, this would mean giving people in defined border communities a degree of political autonomy to make it easy for them to cross back and forth.

A special border pass is already in place for those living around the Thai-Malaysian frontier, but nothing similar exists for New Guinea, or for Sabah and Mindanao. A previous program allowing traders to conduct barter trade between Mindanao and Sabah was suspended amid the COVID pandemic.

Administration of borders is never easy, but in the Southeast Asian context, the weight of history is perhaps stronger. It tells us that at the end of the day, the mess created by colonialism in Southeast Asia will be with us for some time to come.

Dr Mahathir: New concept on Malay and Islamic agenda to be initiated

In Malaysia ‘semua boleh’ – everything is possible
12 August 2022