When you are down the pub and jealously looking over at the streaming power your mate’s device can conjure, the first question is always the same; who is your contract provider? This usually leads to a moan about one telco being terrible, but they are cheaper, so it’s not the end of the world. Now, some telcos are certainly better at delivering performance than others, but it is not the only factor which should be considered.

This is not to say the telcos are completely blameless, farmers will back you up here, but a new report from Opensignal suggests there is quite a notable variance between the performance of each of the device manufacturers when the smartphones are out in the wild.

“All smartphones are not created equal,” Ian Fogg, Opensignal’s VP of Analysis, wrote in the report. “Just as different smartphones offer a variety of camera qualities or screen sizes, they also differ in the network communication features which enable faster download speeds and smoother video streaming.”

Using 117.8 billion measurements from 23.3 million devices between April 1 and June 30 , Opensignal has produced a critique of the top three smartphone manufacturers across a broad range of different nations.

The table below is only a snippet of the research, but it paints an interesting picture:

Across the 40 countries which were included in the research, Samsung’s devices were the fastest on average in 14 of the countries, Apple was fastest in 7. In the remaining 21, there was a tie for the fastest average device speed. Huawei was not a standalone winner anywhere, though it was joint fastest in 7.

Interestingly enough, in some of the markets where Apple is the leader in terms of market share, it is not the best performing provider. In the US, Samsung lead the way in terms of average download speeds by quite a margin, and it also fell in second place in Japan. Australia is another market where the iLeader came up short.

As mentioned before, the telcos are not innocent when it comes to poor performance. Congestion on individual mobile sites, network architecture, line of sight and numerous other factors slow download speeds, but we suspect few people will blame their devices. Another interesting factor is the amount which has been spent on the device in the first place. 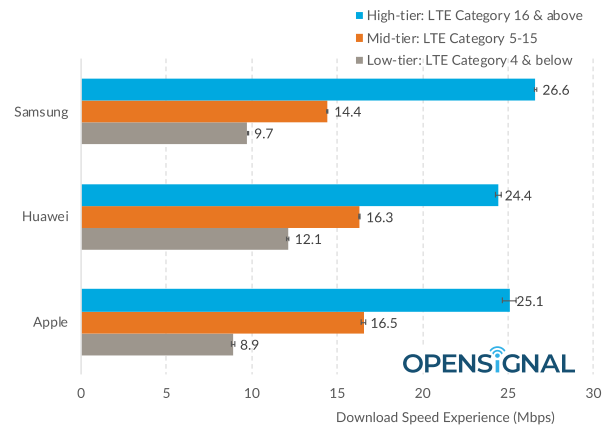 As you can see from the graphic above, the difference between high-, mid- and low-end devices is very notable. Many will accept there are differences between the different tiers of devices will offer different performance when they actually think about it, however, the cynic in all of us will simply believe the manufacturers are attempting to bleed as much cash out of customers for additional bells and whistles.

Moving forward, when latency becomes more of a factor, this is another area which could see more variance.

Latency is often discussed today, and while there are few usecases for the moment, this is an area which will continue to develop over the coming years. Release 16 from 3GPP should improve these metrics and drive the creation of new business cases. Soon enough there might be more justification for ludicrously expensive flagship devices outside the realms of bells and whistles. 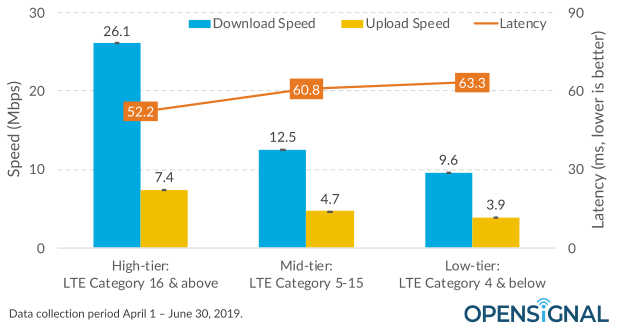 An interesting question for Apple customers will be the performance of the devices in the future. Over the last few years, Apple has been moving more of its supply chain in-house, attempting to remove any reliance on external partners. The recent purchase of Intel’s smartphone chip business unit is an excellent example.

Apple is a company which excels at a lot of things, but the hardcore engineering of components is not one of them right now. The leader in the modem field is arguably Qualcomm, though considering the turbulent relationship between the two over the last two years, it would surprise few to see a permanent end to it. What impact this has on the performance of the iPhone remains to be seen.

Huawei is another which could be skating on thin ice. Similar to Apple, the Chinese giant has moved more activities to its own components business, HiSilicon, though it is still reliant on external partners in certain areas. A number of these suppliers are from the US, painting an unpleasant picture while it remains on the Entity List, banned from purchasing some critical components.

Corning is one supplier to Huawei, however finding another company to supply the cover glass will be a simple job. When it comes to the highly-specialised semiconductor manufacturers, one of the areas the US excels globally, it becomes a bit more difficult. The likes of Qualcomm, Skyworks Solutions, Micron, Qorvo and NeoPhotonics would have been selected for a reason. There will be alternatives, but you have to wonder whether this will impact performance.

The technology industry is going through an interesting time at the moment, and depending on who you work for, that is either very good or very bad. With the growth of the voice interface and emerging technologies such as AR set to play a bigger role in the future, devices could look and feel incredibly different in a few years.

Interestingly enough, consumers don’t seem to purchase devices based on the performance offered. This might be down to the assumption performance is entirely driven by the telcos, or perhaps consumers do not understand the complexities. Maybe this will change in the future, but it could certainly be a selling-factor for some manufacturers if the consumer actually understands the language, numbers and acronyms.

There will be new factors to consider when purchasing or even using a device, but when things do go wrong, blaming the telcos for poor performance might not be the most complete assumption.