Leaders don’t control as much as they (and we) think they do. And that’s a good thing.

By Neil Chilson September 23, 2021
Opinions expressed by Entrepreneur contributors are their own.
Is there any type of organization more concerned with control than the military? Militaries have a predetermined and static hierarchy of ranks, seek to train soldiers into specific skill sets, and have a chain of command that dictates who is in command. And yet, in complex situations, even the military appreciates that when the stakes are enormous, true leadership requires letting go of control. 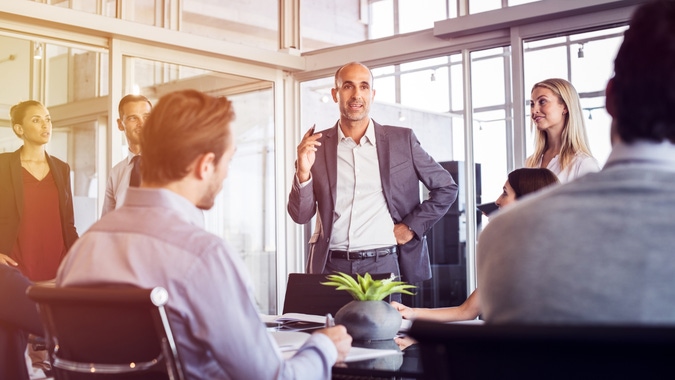 General Stanley McChrystal realized this when, despite having the overwhelming superiority in firepower, manpower, intelligence, and resources, the Joint Special Operations Command Task Force that he led in Iraq was continually surprised by Iraqi terrorist leader Abu Musab al-Zarqawi and other Al Qaeda in Iraq forces. The Task Force couldn’t keep up with al-Zarqawi’s smaller, poorly trained extremist forces. McChrystal identified one cause of the Task Force’s sluggishness: the need for senior command to approve every major decision. The exertion of control by the top commanders — specifically, McChrystal himself — was a tactical liability. Although being asked to approve decisions made him feel important and like a leader, he realized he was often merely rubber-stamping the better-informed recommendations of his trusted team. That hurdle not only wasn’t adding value, but it also hamstrung the soldiers in the field, preventing quick responses to changing circumstances.

While modern information technology gave McChrystal the ability to know much more about the individual actions of units on the ground, that transparency was no substitute for decision-making closer to the situation. Pushing all decisions up to commanders, or even to the White House, simply didn’t scale.

Instead, McChrystal decentralized decision-making, ensuring his teams had a shared culture, clearly understood the overall mission, and shared information transparently. He then trusted his teams to make decisions in the fast-developing arena they found themselves. This sped up decision-making and enabled the Task Force to make real progress against Al-Qaeda in Iraq.

McChrystal’s loosening control enabled a too-rigidly hierarchical organization to demonstrate what’s called “emergent order” — a type of organization that forms as units within find effective ways over time, rather than simply following a design imposed from above. The way he transformed the Task Force is an excellent example of how to lead in a world of complexity.

The Fading Illusion of Leadership in Control

Our increasingly complex world has made more obvious what has always been the case: Leaders don’t control as much as they (and we) think they do. This can create confusing relationships between leaders and those they lead. For example, leaders are comforted by the belief that they’re in control (and it feeds their egos, too). And because of our tribal instincts and attraction to simplified “Great Man” narratives, many followers want to believe that leaders are in control. But leadership is not that straightforward. In any complex organization, its leader must delegate enormous amounts of the control that they nominally exercise. As a result, the people who serve that leader are essential to the leader’s mission, and the leader’s authority hinges on the followers’ willingness to follow.

Modern information technology has undermined these misapprehensions. In the past, leaders’ egos were spared by a lack of information. Leaders often thought they had control because they didn’t have actual information about what they nominally controlled. Hierarchy and command-and-control were the best we could do, and nobody thought much about how little control they exercised.

Ironically, the increased flow of information has created an initial grasping for control. A Civil War general had no way to plausibly micromanage units on a mission. The operations were decentralized by necessity. The rise of real-time information and communications infrastructure seemed to remove that necessity. McChrystal’s insight was that, in fact, even with additional information, decentralized decision-making was still vital.

Increased information flow has also undermined the illusion of leaders being in control by putting individuals at all levels of leadership on more level playing field, at least in the battle of communications. Anybody can very publicly and directly criticize leaders on social media. That kind of expression can grow to be quite powerful as others online reinforce and repeat the message. It’s maybe a bit of an exaggeration to say that tweets can topple governments, but decentralized online movements have certainly amplified stories that brought down people who have been powerful and “in control” for decades — just think of the #MeToo movement.

The Business Benefits of Leadership without Control

The idea that innovative organizations benefit from leadership without control isn’t completely novel. “Nobody has really recommended command-and-control leadership for a long time,” notes MIT professor of management Deborah Ancona and her colleagues in their 2019 Harvard Business Review article on “Nimble Leadership.” Ancona and her colleagues studied Silicon Valley R&D lab PARC and the privately held materials science company W. L. Gore & Associates. They highlight two environments rich with structure and culture that enable emergent order. These characteristics include:

According to the authors, these characteristics at PARC and Gore have enabled “a whole greater than the sum of its parts” that is adaptive, innovative, and nimble. Near the end of their article, they note:

“Academics use the word ‘emergence’ to describe a process whereby order at the system level arises from individual interaction at lower levels of aggregation. We saw that play out at PARC and Gore.”

Advice to Leaders: Think of Processes, Not Products

Emergent order doesn’t always produce attractive results. In fact, good outcomes to complex problems often require a tolerance of disorder and the embrace of a lack of control. One way to increase our tolerance of the messiness often necessary to facilitate emergent order is to engage in process thinking.

We tend to view the world as made up of objects or outcomes and we focus on their static nature. But all the objects around you can be viewed as a series of changes over time. This is true of inanimate objects, like a coffee mug, but it is especially true of living things. Focusing on processes helps reinforce that change is inevitable, even to objects that seem permanent. Iron will rust; stone will crumble; even diamonds are not forever. If you’re too focused on how things are, you may misjudge what they will become. Thinking of the world around us as made up of processes also reveals the interconnectedness of what often seem like discrete things. In particular, it can help us appreciate how our actions shape the things and people we interact with — and how they shape us.

In short, seeing processes rather than things helps us take a more connected, dynamic, and emergent view of the world, which often is the more realistic view. This can help us tolerate some messiness and better avoid the illusion of control.

This essay was adapted from Chilson’s new book, Getting Out of Control: Emergent Leadership in a Complex World.

Neil Chilson is an author, tech policy expert, and innovation evangelist who works for Stand Together and is based in Washington, D.C. Chilson is a regular contributor to multiple news outlets, including the Washington Post, USA Today, and Newsweek. His book, Getting Out of Control: Emergent Leadership in a Complex World, was released in September 2021.

You can subscribe to his newsletter, Out of Control.

How to distinguish between good ideas and future dreams

How to uncover your true leadership style

5 principles learned from a lifetime in business

The “Batboy Principles” of leadership

What is the “Great Realization”?